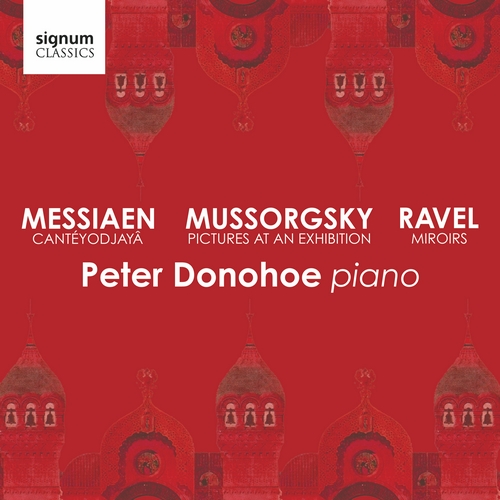 Modest Mussorgsky:
Pictures at an Exhibition

Olivier Messiaen:
Cantéyodjayâ
A new collection exploring depictions of ‘pictures’ in music performed by Peter Donohoe – acclaimed as one of the foremost pianists of our time for his musicianship, stylistic versatility and commanding technique.

One of the pinnacles of nineteenth-century pianism, Modest Mussorgsky’s Pictures at an Exhibition broke new frontiers in its writing for the piano through its use of ringing bell-like sonorities, dramatic juxtaposition of registers and dynamics, its approach to resonance, percussive octaves and rapid hand-alternations, and sheer grandeur of sound. Introducing new ideas about virtuosity that owe much to orchestral thinking in the ways the full range of the piano’s tone-colours are explored, this work requires immense stamina through combining great finger dexterity with unbridled power.

Mussorgsky’s masterpiece is coupled here with works by Ravel and Messiaen – composers who were indebted to the innovations of their Russian predecessor.

Miroirs comprises a set of five pieces evoking contrasting moods and pianistic characters. Far from being Impressionist – a movement with which Ravel had little real affiliation –the ‘Mirrors’ of the title suggests more Symbolist associations in that the individual pieces explore ambiguities between supposed reality and ‘reflected’ simulation. Ravel was particularly fascinated by a line from Shakespeare’s Julius Caesar: ‘the eye sees not itself, but by reflection, by some other things.’

An unusually non-descriptive work for Messiaen, without religious references or bird- song, Cantéyodjayâ is about musical process and is constructed as a mosaic-like collage in which a jaunty rhythmic refrain is contrasted with a multiplicity of contrasting ideas, many of which are re-workings from his gargantuan Turangalîla-Symphonie.
Recorded in Cedars Hall, Wells Cathedral School, Somerset from 13th to 16th April 2018