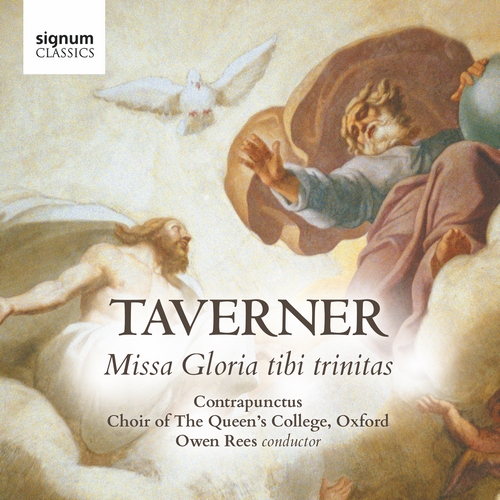 Gaude plurimum
Le roy Kyrie
Missa Gloria tibi trinitas
Ave Maria
Audivi vocem
Dum transisset sabbatum
Owen Rees leads early-music consort Contrapunctus alongside The Choir of The Queen’s College, Oxford in performances of John Taverner’s masterwork, the Missa Gloria tibi trinitas. A virtuosic work, it has pride of place in the Forrest-Heyther partbooks (in the Bodleian Library in Oxford), which it has been variously argued originated at Cardinal College or at the Chapel Royal. It might well have been heard on Trinity Sunday in the chapel of Cardinal Thomas Wolsey’s palace at Hampton Court.

The work is accompanied by other sacred choral works by Taverner, including his Ave Maria composed for Wolsey’s Cardinal College, Oxford, and one of his most widely copied works, Gaude plurimum – a dramatic work where Taverner exploits the power of his full forces to evoke Christ’s harrowing of hell and the breaking of ‘the bloody powers of the prince of eternal death’.

Contrapunctus is an early-music vocal ensemble dedicated to passionate interpretations informed by authoritative insight and understanding. Directed by Owen Rees, a specialist in music of the sixteenth and seventeenth centuries, the group presents imaginative programmes revealing previously undiscovered musical treasures and throwing new light on familiar works.
Recorded in the Church of St Michael and All Angels, Oxford, from 10th to 13th July 2018