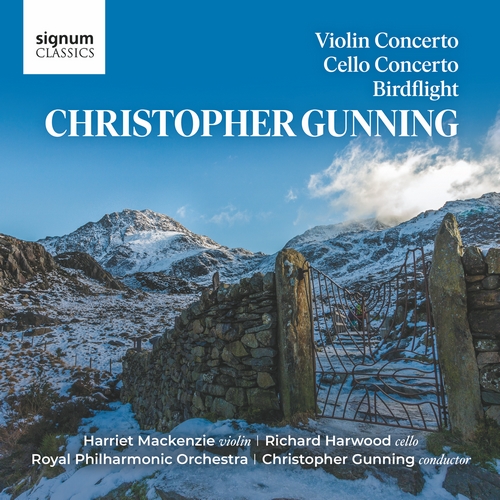 Not composed until 2011, Gunning’s Violin Concerto was composed after inspiration whilst the composer was out hiking in Wales. The violin is supposed to represent ducking and weaving, rather like the insects and animals found in the Welsh hills and valleys. However, despite this positive venture for the composer, the emotions of sadness and melancholy are never far from this music – feelings which never seem far from Gunning’s music.

The Cello Concerto is quite different. Although composed hard on the heels of the Violin Concerto, it is generally darker though equally expressive.

The third piece, Birdflight, is for the orchestra alone; a kind of tone poem. At the opening and close there is some quiet night music with spacious strings. The birds take flight but encounter a problem; a hawk is on their tail. The birds manage to hide and there is a pause. Then, when danger has passed, they take off and once again enjoy the sheer pleasure of flying.
Recorded in Henry Wood Hall, London on 28th and 29th September 2015. Richard Harwood plays a cello by Francesco Rugeri, dated 1692.