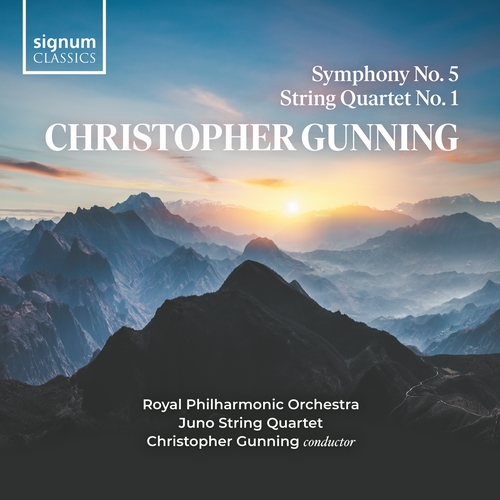 Symphony No. 5
String Quartet No. 1
Christopher Gunning’s Symphony No. 5 was composed during 2009 and was the composer’s most ambitious to date, in four extended movements. There is no strict programme, but the music moves through several phases which could be said to correspond to one’s journey from birth to death. The symphony is dedicated to the memory of Christopher Gunning’s sister Rosemary, who grappled with illness throughout the composition of the work, and died as he was completing it. The String Quartet No. 1 was composed in 1999, and revised in 2006. Each of the four movements is based on on a three note motif, C-D-G, with its four possible transpositions. The first is an arch-shaped passacaglia, and the second is a fast semi-fugal scherzo. The third is quietly expressive and the last is a bright rondo with ostinati based on the 3 note idea. Four-time BAFTA winning composer Christopher Gunning, has composed twelve symphonies as well as concertos for the piano, violin, cello, flute, oboe, clarinet, saxophone, and guitar.