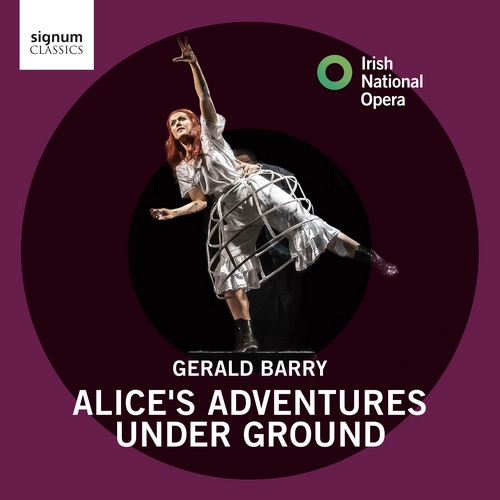 “I shall be too late!... Down!”
“Drink!”
“Which way? Which way?”
A Mad Tea-Party... “Nurse it for a bit.”
The Queen’s Piano and Croquet Masterclass
The Lobster-Quadrille
The Trial – Who Stole the Tarts?
Jabberwocky in Russian
The Garden of Live Flowers... Chorus of Daisies
“When you get to the Eighth Square, you’ll be a Queen.”
Jabberwocky in French
Jabberwocky in German
“Remember who you are! Goodbye.”
Tweedledum and Tweedledee
“Bread and butter,”
Humpty Dumpty
“I’ve sent them all!”
The White Queen Running Across the Country... “Look, look!”
“Ahoy! Ahoy! Check!”
“Without the frost, the blinding snow,”
Signum Classics is proud to announce a new label partnership and recording debut with Irish National Opera, presenting the world-premiere recording of Gerald Barry’s opera, Alice’s Adventures Under Ground, based on the famous book by Lewis Carroll.

Irish National Opera is Ireland’s newest and most enterprising opera company. It champions Irish creativity in its casting, its choice of creative teams and in its commitment to the presentation of new operas.

André de Ridder’s stylistic versatility, projects and collaborations make him much in demand by the BBC Proms, the Holland, Sydney and Manchester International Festivals, and orchestras such as the New York Philharmonic, Chicago and Melbourne Symphony Orchestras, Hong Kong Philharmonic Orchestra and Finnish Radio Symphony Orchestra, among others.
Recorded at University Concert Hall, Limerick, Republic of Ireland, May 2021.