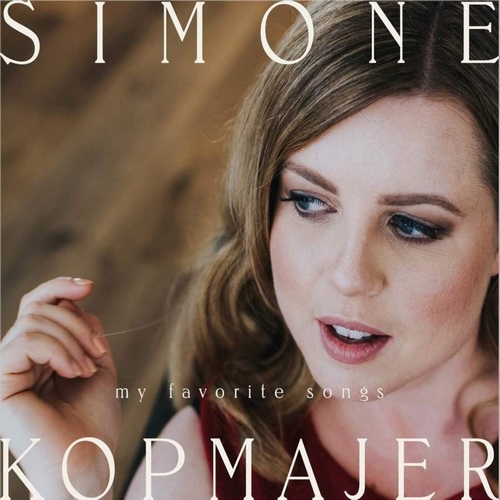 CD 1:
Didn't You Say
Come Fly with Me
I’ve Never Been in Love Before
How Do You Keep the Music Playing
You Don't Call Me
Mighty Tender Love
Exactly Like You
I Dream of You
Shoes
The Morning Sun
Jeepers Creepers
Time
Moonlight Serenade
The Very Thought of You
Two Love Birds
The Good Life

CD 2:
Nothing's Gonna Change My Love for You
Can't Take My Eyes off You
Just the Way You Are
How Sweet It Is
Blue Bayou
The Best in You
Wichita Lineman
That’s Why You Go away
Kiss
What's Going On
Have You Ever Seen the Rain
Whatever Happens (reprise)
Lately
Rolling in the Deep
Don't Let Me Be Lonely Tonight
Ghost in This House
Talking about Simone Kopmajer means talking about one of the most internationally successful contemporary jazz musicians from Austria. Not many in her métier can claim to have played concerts across the planet. There aren’t many stages in Europe the 15-year veteran from Styria hasn’t stood upon. Her expressive and sensitive voice has graced 11 albums and she performed for a loyal fanbase on tours in the US, Japan and Southeast Asia.

With her debut album “Moonlight Serenade”, which was released in 2004 and produced by Todd Barkan, the award winning singer was able to land respectable successes, especially in Japan. As a consequence, the singer was able to steadily increase her popularity from one album to the next. Unfortunately her albums were not available in Austria for a very long time. In 2009 her album “Didn’t You Say”, recorded in collaboration with stars such as George Mraz, Houston Person, Victor Lewis and James Genus , finally also opened the gates to the domestic market.

When Simone’s first album came out in the US some ten years ago, I wrote “To the list of young ones to watch, we’ll add Simone Kopmajer. Write it down. She’s going to be around for a long time”.

And here we are, more than ten albums later. Early on, reviewer Alex Henderson wrote of her “delicate vulnerability”. But Simone now breathes life into those songs in a way that only women who have experienced the textures of time can master.