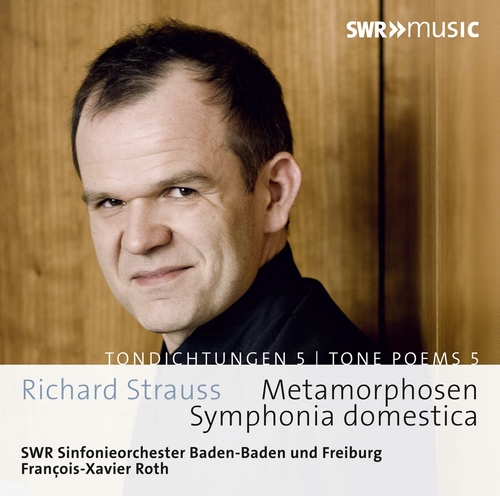 Metamorphosen AV 142, Studie für 23 Solo-Streicher
Completed on New Year’s Eve, 1903, Strauss' Symphonia domestica, like his ensuing final tone poem, Eine Alpensinfonie (see Vol. 4 of the cycle) are paradoxically termed 'symphonies'. Symphonic poems are usually based on an extra-musical programme, while the genre of the symphony embodies the concept of absolute music, intended as a counter-world to reality. Strauss disregarded this separation and designed the Symphonia domestica as a symphony, but with a programme, namely “a symphonic self- and family-portrait”. The composer depicts both himself, his wife and his son in various musical tableaux. Revolving around the banalities of everyday life, the music has a twinkle in its eye. Both Metamorphosen and Symphonia domestica offer insight into the personal thoughts and life of the composer, albeit at different times and in different ways. Prompted by the catastrophes of the Second World War, Metamorphosen reflects Strauss’ state of mind when his world lay in ruins. He was especially affected by the destruction in October, 1943 of the Munich National Theatre, where he was based for many years. The work was initially conceived as a string septet but developed into its unusual scoring for 23 solo strings. He finished the piece on 12 April, 1945, having worked on it for eighteen months. It premiered on 25 January, 1946 in Zurich under the direction of the dedicatee, Paul Sacher. Metamorphosen is Strauss’ final orchestral work – it stands as both a lament and a pessimistic commentary on the times.