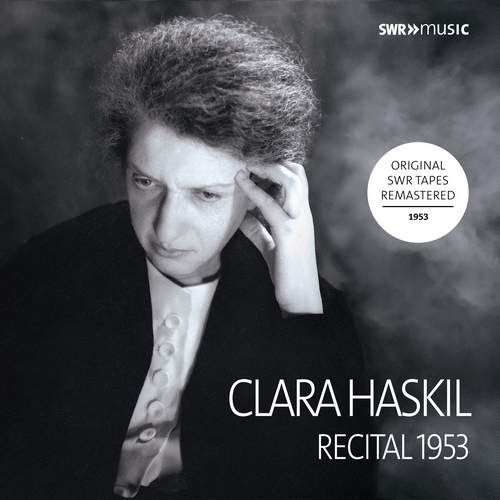 Ravel:
Sonatine für Klavier fis-Moll
Born in 1895, Clara Haskil demonstrated her prodigious skills from an early age, but it was only after the Second World War that she became a fixture on the international concert scene, following decades of illness and selfdoubt. Her resultant short career was characterised more by surprise at the sympathy and recognition she received, and less by ambition. Her first recording was released only in 1947; three years later she made her first appearance at the Salzburg Festival.

In 1906, Clara Haskil was diagnosed with a severe form of scoliosis, a three-dimensional deviation of the axis of the spinal column with curvature caused by the contortion of individual vertebrae. Listening to Clara Haskil’s recordings, and in particular to the recital she gave at the Ludwigsburg Ordenssaal on 11 April 1953, it's difficult not to think of these adverse circumstances that made her everyday life, not least the concert tours, incredibly difficult.

Clara Haskil's Ludwisburg recital featured a colourful sequence of small-format pieces, ignoring the accepted guidelines of the time concerning the choice and timing of programme items. She opens with Bach’s Toccata in E minor (BWV 914) in a surprisingly unemotional, objective interpretation. In contrast, her performance of the three Scarlatti sonatas which follow is much more personal: an interpretation reflecting charming purity, heartfelt sincerity and the ability to perfectly capture the essence of the music (K 87/ L33). The fact that Beethoven’s last Piano Sonata in C minor op.111 was placed in the middle of the programme reveals the self-confidence of a pianist who planned her concert programmes unconventionally, yet with evident sincerity. Despite her physical ailments, her Beethoven performance embodies an inspiring example of unswerving perseverance and recovery: dispatching the work, unusually, in under 22 minutes, the finale's chain of trills evolves into a terse final chord, and harmony is restored. This is an impressive piano recital from a legendary musician.

This recording contains all the items from a recital given by Clara Haskil at Ludwigsburg Castle in April, 1953. Schumann's Op. 99 and the encores have never been previously released.