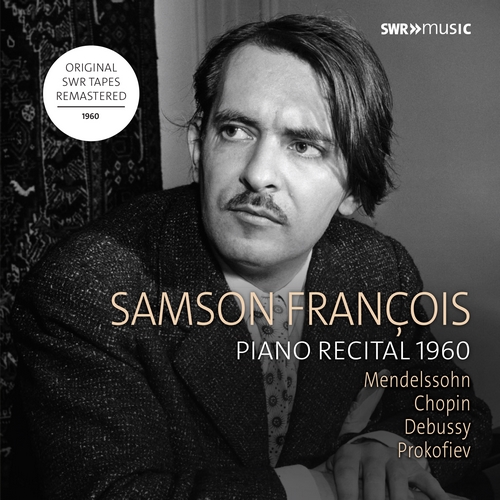 Sergei Prokofiev:
Klaviersonate Nr. 7 B-Dur, Op. 83
Eccentric and flamboyant, Samson François was considered an enfant terrible; the manner in which he conducted his life was rather provocative and self-centred. François led an unsettled existence, characterised on the one hand by remarkable success in competitions and legendary performances, and a penchant for alcohol, cigarettes and nights of bingeing on the other.

He was initially promoted by Pietro Mascagni, who arranged for Yvonne Lefébure to be his teacher. Later, François attended piano classes with Alfred Cortot and Nadia Boulanger, legendary teachers of the Paris music scene. After embarking on an international career as as soloist, Samson François focused his artistic goals on the great works of the Romantic period (Liszt, Schumann, Chopin and others); on standard works by the impressionists (Debussy, Ravel); and on classical contemporary music by Béla Bartók, Sergei Prokofiev and Paul Hindemith.

François later went on to make studio recordings of most the works on this release. This album offers a rare opportunity to experience this extraordinary pianist within the vibrancy of a live recording.
Recording: 03.05.1960, Ettlingen, Schloss