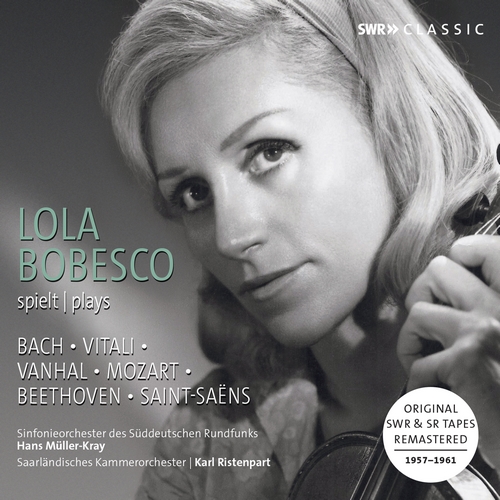 Camille Saint-Saens:
Violinkonzert Nr. 3 h-Moll, Op. 61
Lola Bobesco was a much admired musician whose name is not as well-known today as those of other major 20thcentury violinists. This might be attributed to the fact that one had to experience her live, on stage, where she was especially convincing. The combination of her compelling, lively playing and her skilful channeling of the music's energy made her audience listen with rapt attention. And she still retains such audiences who need no convincing of her major contribution to 20th-century violin performance.

These recordings were made at a time when Lola Bobesco was very active, both as a teacher, founder of orchestras, soloist and chamber musician. In 1958 she founded the orchestra Les Solistes de Bruxelles, taking the position of concertmaster. In 1960 Hans Schmidt-Isserstedt invited Bobesco to perform Brahms with the Berlin Philharmonic Orchestra; performances with Karl Böhm, Otto Klemperer, Rudolf Kempe and Ernest Ansermet followed. From 1962 to 1974 she also taught at the conservatoires in Brussels and Liege. Her busy schedule continued, including concerts with the pianist Jacques Genty, solo recitals with orchestras, duties as concertmaster of the orchestra she had founded, and teaching responsibilities.
Recordings: 05.07.57, Stuttgart, Villa Berg (CD 1, Tr. 1-4); 12.06.57, Saarlouis, Saalbau (CD 1, Tr. 5-6); 13.04.1957, Saarlouis, Saalbau (CD 2, Tr. 1-3); 20.05.1962, live recording; 10.06.1960 (CD 3, 1-3), 04.07.1961 (CD 3, 4-6), Stuttgart, Villa Berg