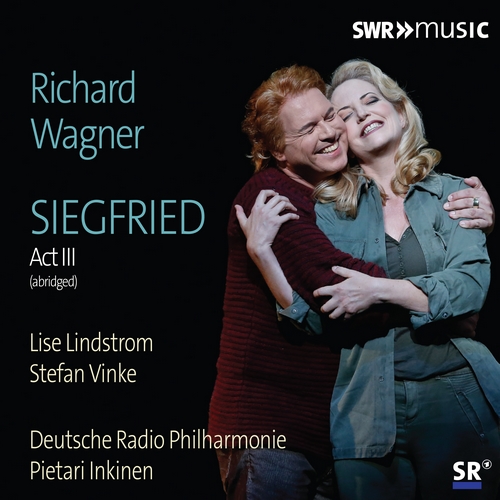 There’s a distinct stylistic break between the 2nd and 3rd acts, which begins full of passion and ends with the great love scene between Brünnhilde and Siegfried, no doubt accounting for the sustained popularity of this final scene. It is often singled out from the rest of the work and the cycle for concert performances, as with the first act of The Valkyrie. In this Saarbrücken performance, the prelude to the third act, the orchestral introduction to the first scene and that of Siegfried’s walk through fire are heard first, in order to present the music as a dramaturgically well-rounded and homogeneous whole.

The conductor and singers are highly experienced Wagner performers. Lise Lindstrom’s performance as Brünnhilde in her first-ever full Ring Cycle for Opera Australia in 2016 received the Green Room Award and Helpmann Award. She has also performed excerpts from Siegfried and Götterdämmerung in the same role with the Japan Philharmonic Orchestra under Pietari Inkinen. In the autumn of 2018, Pietari Inkinen returned to Melbourne to perform Wagner’s The Mastersingers of Nuremberg at Opera Australia, following his previous success with the revival of Neil Armfield’s renowned production of Wagner’s The Ring of the Nibelung in 2016, which had already earned him the Helpmann Award for best opera director in 2014.
Recording: 02.–07.07.2018, Saarbrücken, Congresshalle