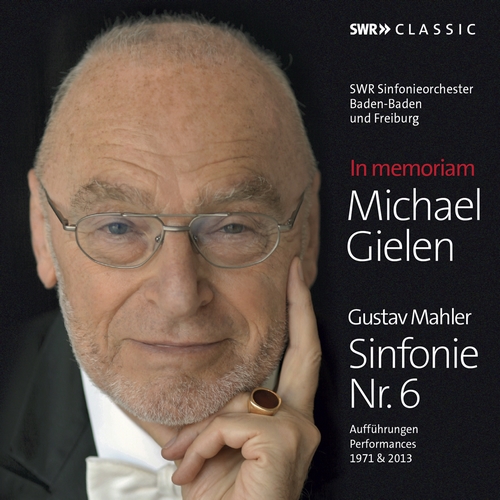 CD 3:
Sinfonie Nr. 6 a-Moll (Tragische/Tragic) [Forts./cont.]
War Mahler gläubig? (Was Mahler religious?)
Recorded 42 years apart, these two performances of Mahler’s Sixth Symphony are highly contrasted in terms of tempo, sense of structure and interpretation. It is certainly appropriate to commemorate Gielen with these two recordings of the work he performed most often – recordings that represent the opposite poles of Gielens Mahler interpretations. For the first time ever on disc, this edition includes the 1971 recording of Mahler’s Symphony No. 6 in its original sound quality.

The sequence of the inner movements of the Sixth Symphony has always been controversial and the cause of editorial difficulties: should it be Scherzo – Andante or Andante – Scherzo? In 1971 Gielen decided that the former made more sense.

Soon after the release of the revised score of the Internationale Gustav Mahler Gesellschaft’s 1998 edition, a research paper proved conclusively that Mahler had changed the sequence to Andante – Scherzo immediately before the premiere, and never reverted.

After studying the evidence concerning the sequence of the movements Gielen was determined to follow Mahler’s apparently express wish, and eventually aimed to perform the symphony with his orchestra once more with this revised order of movements. The invitation to the Salzburg Festspiele 2013 offered him the perfect opportunity to do so.

Thus, the concert on 21 August 2013 was Gielen’s final appearance at the Salzburg Festspiele and his last performance of Mahler’s Sixth. Compared with the recording from 1971, the tempi are markedly different, and it is very difficult to imagine a more dramatic contrast between two performances of the same work by the same conductor!
Recrodings: 12.05.–14.05.1971, Baden-Baden, Hans-Rosbaud-Studio (CD 1); 21.08.2013, Salzburg, Großes Festspielhaus [Live] (CD 2); 21.08.2013, Salzburg,