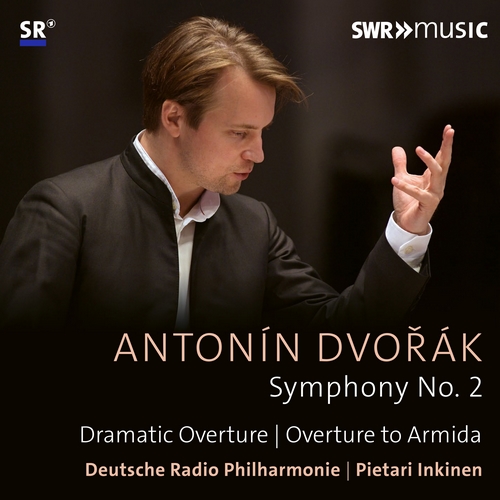 Symphony No. 2 in B flat Major, Op. 4
Dramatic Overture, Op. posth. B 16a (Overture of Alfred)
Overture of Armida, Op. 115
The Second Symphony, composed when Dvořák was 24, was certainly no masterpiece, neither was its revised version. Nevertheless, it is an extraordinary testament to Dvořák’s talent since it clearly bears his stamp, even though it shows the influence of others. “This man has more ideas than all of us put together”, Brahms said in appreciation of Dvořák’s output. This is certainly borne out when listening to the Second Symphony.

As a composer Dvořák was particularly interested in opera. For his first stage work – Alfred – he used a libretto by the romantic poet Theodor Körner (1791-1813). According to the entry in the score, Dvořák finished the work in only five months, on 28 September 1870. Dvořák was well aware that his first opera was that of a beginner trying his hand. However, as regards the overture to Alfred, Dvořák was convinced of its musical merit. Using the title Tragic Overture the piece was played for the first time at a concert given by the Czech Philharmonic Orchestra on 4 January 1905, several months after Dvořák’s death. The title Dramatic Overture that is normally used might be easily confused with the Hussit Overture, Op.7, which is known by the same title.

Rusalka (1901) marked Dvořák’s late breakthrough as an opera composer, after which he began exploring possibilities for his next opera and came across the possibility of a new libretto in Jaroslav Vrchlický’s Armida. The work is especially noteworthy for Dvořák’s independent and imaginative use of the leitmotif and the way he set the exotic tonal landscape of the East to music. But the premiere on 25 March 1904 was only a modest success. Dvořák died a few weeks later, on 1 May. Nowadays Armida is rarely performed, even in his native country, and only the overture which includes themes of the opera has survived as a concert piece.
Recording: 17.-21.9.2018, Großer Sendesaal des Saarländischen