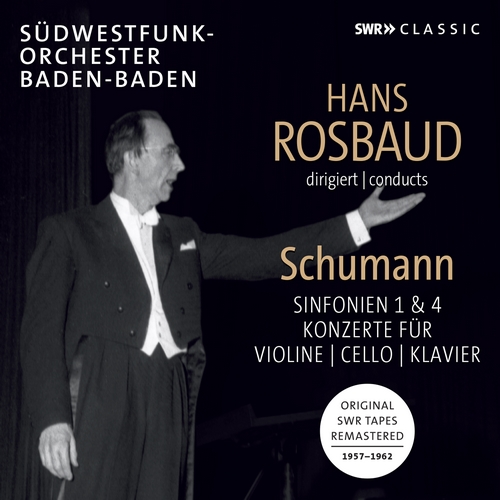 CD 3:
Concert for piano and orchestra in A minor, Op. 54
The SWR Rosbaud series presents most of Rosbaud’s recordings with the former symphony orchestra of the broadcasting corporation Südwestfunk in Baden-Baden, his main instrument from 1948 until his death, which due to his meticulous rehearsal practice became one of the best European orchestras of the 1950s. Half a century after his death and corresponding to his exceptional artistic qualities, this edition is supposed to make Hans Rosbaud known beyond the circle of music experts as one of the great maestros.

As most of Rosbaud’s numerous recordings for the radio were known only to the listeners of the radio station Südwestfunk in South-West Germany some clichés about his music that were already popular in his lifetime have become firmly established. He was considered as a conductor of the “new objectivity”, and stylised as an anti-romantic icon. His undoubted authority and integrity were used as an urgently needed counterpart to Herbert von Karajan’s commercial sound fetishism and the routine glorification of Karl Böhm. Hans Rosbaud, however, combined enormous musical skills with a totally unassuming manner and never became a victim of grossly exaggerated vanity.