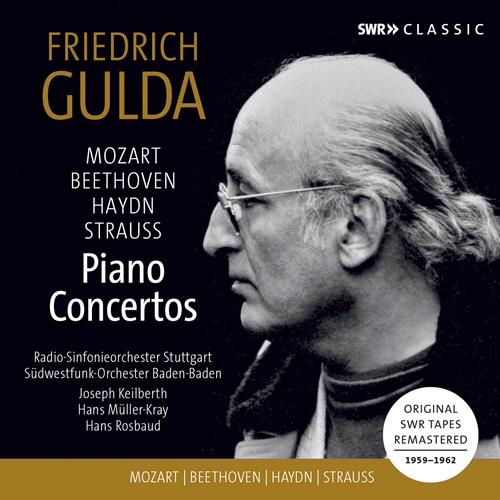 CD 3:
Wolfgang Amadeus Mozart:
Piano Concerto No. 14 in E flat Major, K449
Piano Concerto No. 23 in A Major, K488
Although the repertoire on this album might be considered rather conventional, one can nevertheless appreciate – even after several decades – why audiences must have been hugely impressed by Gulda’s forceful, lucid and rhythmically innovative playing.

Gulda played Mozart's Concerto in C Minor, K491 for the first time in Buenos Aires in 1952 under Igor Markevich. It is one of the piano concertos which he revisited in the 1980s, conducted by Harnoncourt. In this recording from the 1959 Ludwigsburg Festival, Gulda already succeeds in capturing the melancholy aura of the work.

Beethoven’s Fourth Piano Concerto, with its highly imaginative outer movements and the tete-a-tete between soloist and orchestra in the second movement, is virtually made for Gulda’s incredibly nuanced touch. This concerto was to accompany Gulda throughout his life – starting in Geneva in 1946 and ending with his performance with the NDR Symphony Orchestra in Hamburg in 1993.

Gulda would sometimes play two piano concertos in a single evening, testament to his boundless energy. Haydn’s Piano Concerto No. 11 appeared in his programmes from time to time on such occasions. Gulda’s crystal clear and rhythmically brilliant technique never ceases to fascinate the listener and makes his performance of this highly virtuoso piece a special experience.