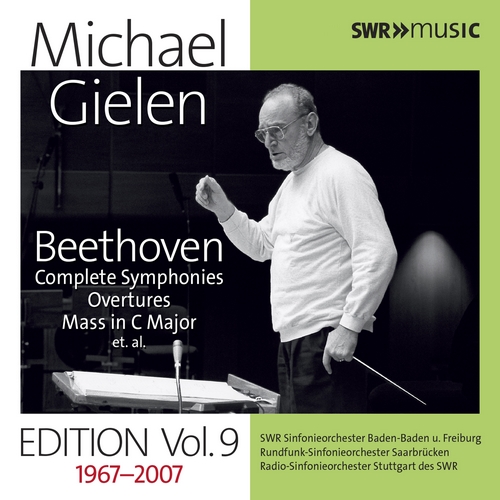 CD 8:
Consecration of the House, Op. 124
Overture in E Major, Op. 72b
Große Fuge in B flat Major (arranged for string orchestra by M. Gielen)
Mass in C Major for soloists, mixed choir and orchestra, Op. 86

DVD:
Symphony No. 3 in E flat Major, Op. 55 “Eroica” (1987)
In 2020, the 250th anniversary of Beethoven's birth, Gielen’s importance as an interpreter of Beethoven’s symphonies deserves to be acknowledged by a separate box set within our edition. For a long time Gielen’s core competence was seen in connection with the Second Viennese School, though right from the start of his career as a conductor he had paid particular attention to the First Viennese School – Haydn, Mozart and Beethoven.

After Hermann Scherchen and René Leibowitz, Gielen was one of the first conductors to take Beethoven’s metronome markings seriously. He took advantage of two invitations from German broadcasting organisations to establish himself in 1970 as the most radical innovator regarding Beethoven interpretations. The 1980 Eroica production with the Cincinnati Symphony Orchestra was the first for a long time to be based on Beethoven’s metronome markings: these were applied throughout and more consistently than ever before. Little wonder that the recording became quite famous.