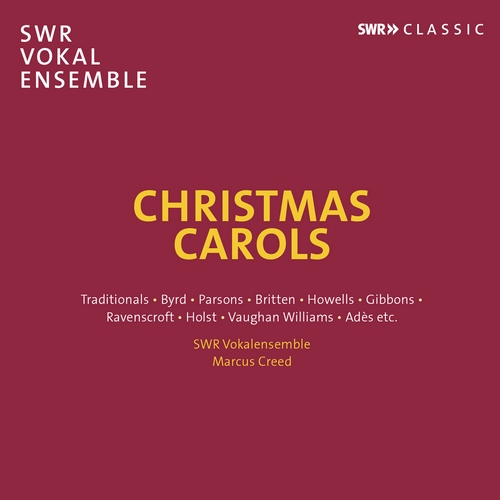 Benjamin Britten:
A Hymn To The Virgin

Peter Wishart:
Alleluya, A New Work Is Come On Hand

Ralph Vaughan Williams:
This Is The Truth Sent From Above

Orlando Gibbons:
Hosanna To The Son Of David

Walford Davies:
The Holly And The Ivy

David Willcocks:
Tomorrow Shall Be My Dancing Day

Gustav Holst:
In The Bleak Midwinter

Trad.:
Lully, Lulla, Thow Little Tyne Child
Christmas carols are an integral part of Christmas, along with plum pudding and turkey, paper crowns and mistletoe. They’re sung in all major cathedrals and churches, first and foremost in the chapel of King’s College, Cambridge. Nowadays, carols are associated with religion or Christmas, but this close link has developed only over time. First references to “caroles of Cristemas” can be found in British sources from around 1400. Around 1600 the carol could also take the form of a complex polyphonic choral work, such as William Byrd’s six-part Carroll for Christmas Day (1611). During the 19th century, Christmas carols experienced a renaissance when Christmas was promoted as a holiday and commercialised. From the beginning of the 20th century the Christmas carol gained renewed appreciation on the part of contemporary composers such as Gustav Holst, Benjamin Britten, Herbert Howells and others. This was due in no small part to Vaughan Williams’ musicological research and to the wide dissemination of traditional carols through the Oxford Book of Carols.

This recording presents singing at the highest level in Christmas Carols from the Middle Ages to the present day. Thomas Ades, for example, was commissioned to write The Fayrfax Carol in 1997. This is a CD which brings pure Christmas joy into your home.
Recording: 26.–29.11.2018, Funkstudio des SWR, Stuttgart