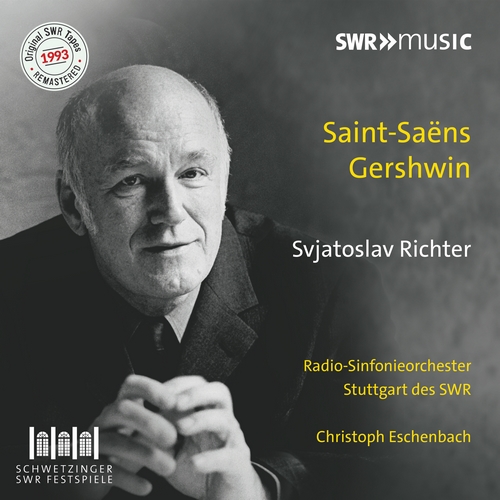 George Gershwin - Concerto in F für Klavier und Orchester:
I. Allegro
II. Andante con moto
III. Allegro agitato
This recording of the 1993 Schwetzingen Festival has already achieved cult status. The then 78-year-old Sviatoslav Richter plays for the first and last time in public Gershwin's jazzy "Concerto in F". Gershwin's works had always been suspect under the Soviet regime. All the more surprising was Richter’s decision to perform this work in his maturity. Needless to say, Richter never made a formal, studio recording of this work. It is not only a unique recording, but also a document of Richter's expansive interest in all musical repertoires than came under his purview. The Fifth Piano Concerto by Camille Saint-Saëns was eclipsed by the same composer’s more popular “Second” Concerto throughout Richter’s performing career. With the exception of one Melodyia LP, he never again recorded this work and there is no record that he ever again performed it internationally. With this concert, there can be no dispute that we are dealing with a real rarity. To sum up, this CD not only for admirers of this great pianist, but is an exciting contemporary document of a great musicians artistic preoccupations late in his career.
Recorded 30.05.1993 at Schwetzingen Rokokotheater Konzertmitschnitt, Re-release of H 93707