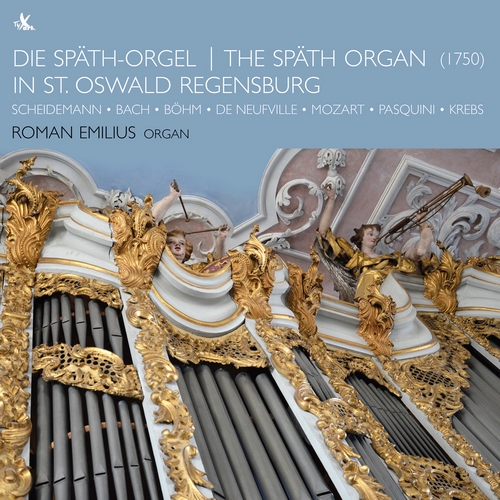 Johann Ludwig Krebs:
Fantasie in F, Krebs-WV 419
Fantasia a gusto italiano, Krebs-WV 422
Fantasie in F, Krebs-WV 420-1
The organ in St. Oswald‘s church in Regensburg (Bavaria / South Germany) was inaugurated in 1750. This recording on the occasion of its 270th birthday documents its excellent sound. To this day, the instrument by Frantz Jacob Späth has been largely preserved in its original state and is an important testimony to the art of South German organ building.

Frantz Jacob Späth was born in Regensburg in 1714 and died there on 23 July 1786. In Regensburg he built the organs of St. Oswald in 1750 and of the Church of the Holy Trinity in 1758. Of the latter, only the casing and some few pipes have been preserved. What made Späth famous, however, were his pianos, above all because of his invention of the tangent piano. The instrument, somewhere between a harpsichord and a fortepiano, was the reason for his company‘s international fame. To date, about 20 pianos of this type have been preserved in the most important instrument collections. Like other piano makers of his time, he, too, experimented: in 1770, he advertised his Clavecin d’Amour, a combination instrument with strings and an organ stop (auto traversiere) on two manuals.