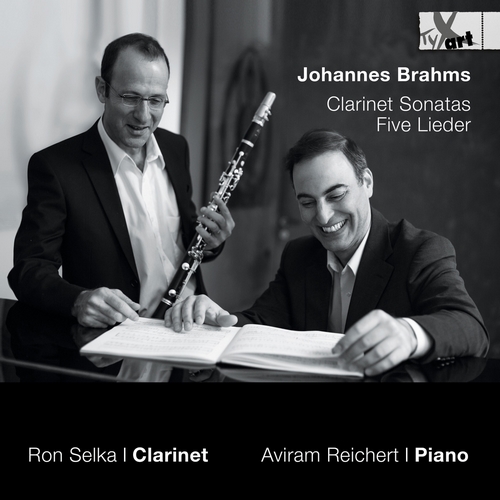 Clarinet Sonata in E-flat major, Op. 120 No. 2
Four Lieder, Op. 105
Clarinet Sonata in F minor, Op. 120 No. 1
Minnelied, Op. 71/5
A match made by their teachers, Ron Selka (clarinet) and Aviram Reichert (piano) have been collaborating for over 30 years. Starting in high school with a successful audition performance for the IDF Outstanding Musician program, they have performed numerous programs in duo recitals in Israel, the United States and South Korea, as well as chamber music concerts with many prominent musicians. This CD is a milestone in a long musical journey traversed together.

With this glorious complementary pair of CLARINET SONATAS, Brahms pays tribute to Mühlfeld’s variegated tone palette, the first sonata sombre and rapturous, the second mellow and lyrical, together covering every possible nuance of color and mood, lyrical, rich in texture and melodic invention. Richard Mühlfeld was principal clarinetist of the Meiningen Orchestra (Germany), whose playing instantly captivated Brahms when he first heard him play in early 1891.

Although Beethoven’s shadow may have loomed large over Brahms’s instrumental music, Brahms was considerably more relaxed in composing for the voice. From his earliest youth to his final composition, “Vier Ernste Gesänge” (Four Serious Songs), song-writing stood at the very heart of his work, free from the uncompromising self-critical scrutiny to which he subjected his instrumental works.

Song was not only present in his vocal works – numbering nearly three hundred – but also in many of his instrumental works, which frequently quoted or alluded to songs, or had a distinct song-like quality to them. In light of this transmigration between the vocal and the instrumental, arrangements of Brahms’s SONGS such as those on this album are a natural extension of a well-established Brahmsian practice.
Recording: 02/2020 – Clairmont Hall, Tel Aviv University/Israel. Ron Selka is a Buffet Crampon artist and plays R13 Prestige and Festival Clarinets.