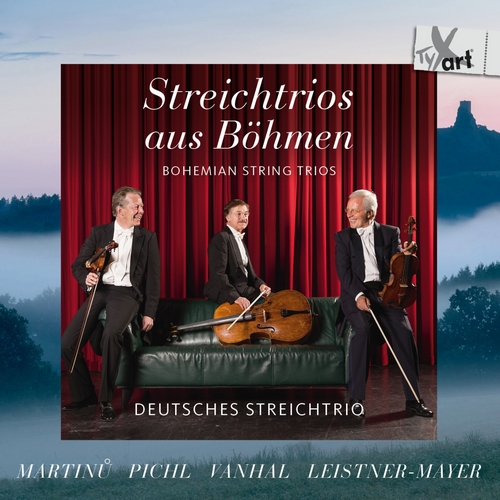 Bohuslav Martinu°:
Streichtrio No. 2
“From Bohemia’s Woods and Fields” – this is how we might sum up the shared roots of these four composers. Vaclav Pichl (World Premiere Recording) and Johann Baptist Vanhal penned their works in an early classical style, while Bohuslav Martinu and Roland Leistner-Meyer, born 1945, (World Premiere Recording) deployed the aesthetic means of expression of their own period to enrich the repertoire while still invoking the ideals of the classical era. This programme is the perfect treat for listeners who enjoy discovering new works and expanding their musical horizons!

DEUTSCHES STREICHTRIO: “No other string trio has performed so many new compositions for the first time, produced so many CDs, and helped this rare form gain such prestige as has the DEUTSCHES STREICHTRIO” – thus the music press in its reviews. The headlines – such as “A First-Rate Evening”, “Interpretive High Point”, “On the Mount Olympus of Chamber Music”, – say it all. In the more than 40 years since its founding the German string trio has received many awards – among others the “German Record Critics’ Award”, and today ranks among the world’s leading chamber music ensembles.
Recording: – Konzertsaal Ev. Akademie Tutzing/Germany, 12/2021. Jürgen Weber plays a 1780 Lorenzo Storioni viola from Cremona, Italy.