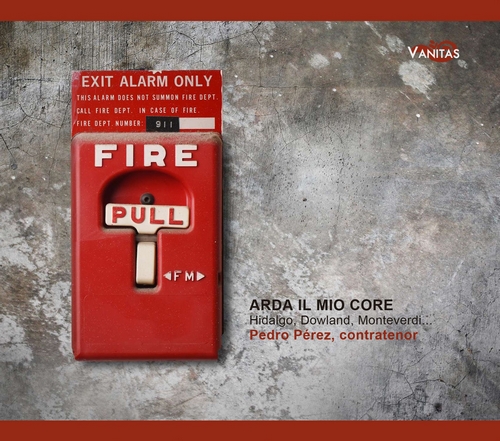 Claudio Monteverdi:
Si Dolce e'l Tormento
Ecco di Dolci Raggi il Sol Armato
Pur ti Miro
Let my heart burn! If we were asked about passion, about those loves which have come and gone along our life, different images of teen or platonic loves would come to our minds, of those which make you crack a half smile and a revealing flirting look... Who hasn’t ever fallen in love? There is no doubt that we would also remember how much you suffer in a sea of uncertainty, of expectancy, for feeling rejected. Yes: the heart really rules. Love, in its essence and operation has not changed a lot throughout the years, and that’s why we would identify ourselves with every work in this album. A treatise of love, wait, patience, pain, uncertainty, hopes ....brought together around composers coming from three European countries: England, Italy and Spain.

In the early 17th century, in order to express complex emotions such as love, musicians and poets inspired by the classic historic past, searched for semanticity about which Zarlino had already talked on his Institutioni harmoniche (1558). Later, Vincenzo Galilei set up in 1581 the basis on which ‘the new music’ would be built, relating words and sounds to the emotional world of the listener. And from that very moment, the Theory of the Affections stopped being just a theory and turned into a language that gets the spectator involved in the effects. These musicians and poets who provided their words at the service of music, developed a real intellectual and emotional game. They managed to delve into the intricacies of love, fighting against the annoyance and despair of rejection. Who better than the continuous dialogue between a musician and a poet to express it?