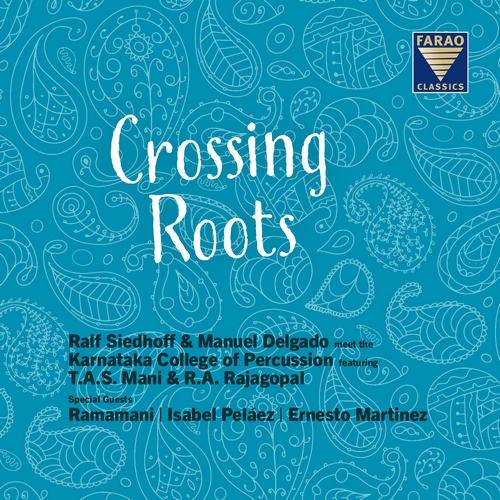 Entre Dos Auras
Gusgulus
Saraswathi
Behind The Mirror
Alma De Cristal
The Mermaid
Karnataka
Namaste Huelva
Ganpati
Sin Distancia
Although flamenco is the epitome of traditional Spanish music, its influences can be traced back to a wide variety of cultures. Thus some of its roots can also be found in India. In terms of its rhythmic conception and precision, flamenco’s similarity to classical South Indian Carnatic music is striking.

Presenting their own compositions, Ralf Siedhoff and Manuel Delgado join Spanish and Indian friends in embarking on a musical journey into the past.

Crossing Roots was released in 2000. With this re-release featuring a new look and remastered sound, we want to help ensure that an important part of cross-border music history is not lost.
Recording: Bangalore (Aravind Studios), Paris (Studio Recall), Weimar and Munich, Feb till Apr 2000