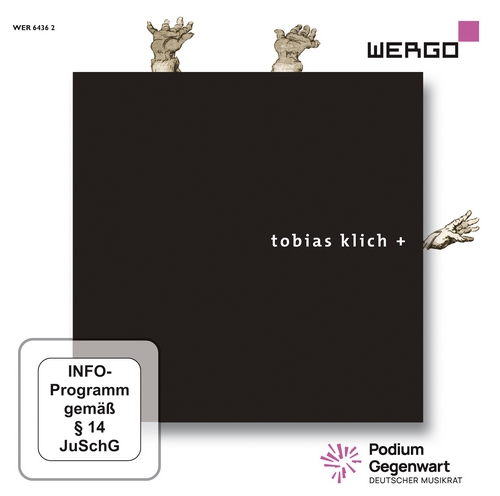 In dialogue with the famous socio-critical cycle Los Caprichos by Francisco de Goya, Klich’s "Goya-Triptychon" (‘Goya triptych’) takes specific pictorial elements from the etchings of the spanish master and transfers them into the gestures of the players. With projections consisting of fragmentary pictorial excerpts, which are synchronised as closely as possible with the music and the players’ movements, the different layers merge to an organic entity.

Another large cycle of this compilation is the four-part collaborative project "4 Hände" (‘Four hands’) with composer CHEN Chengwen. Here, two musicians play together a single instrument and produce sounds in multiple nuances, which could only be realised in this four-hand manner. The composers refer to the partition of man’s original nature into four-armed spherical beings described in Plato’s Symposium. Diverse solo-interpreters, as Séverine Ballon and Asa Akerberg, present impressively the character of their instruments and allows us a glance into their relationship.
Recordings: 9.–15. September 2018, Kammermusiksaal Deutschlandfunk, Köln; 7.–9. September 2020, 9.–10. Februar 2021, Sendesaal Bremen; 12.–17. Oktober 2020, Eventlokal Hüttenwerk Michelstadt; 4.–8. Februar 2019, Filmstudio J. Chan-A-Sue, Michelstadt.