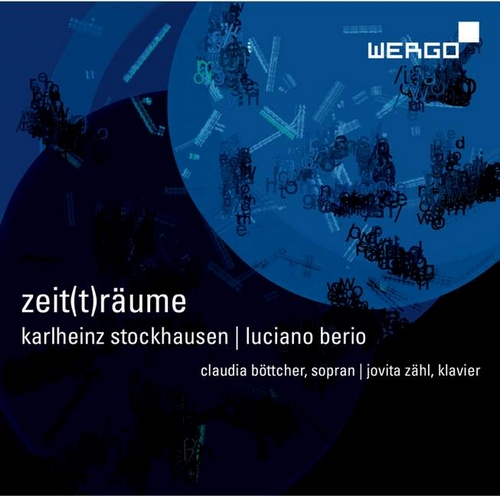 Berio:
Sequenza III for woman's voice
Quattro canzoni popolari
The soprano Claudia Böttcher and the pianist Jovita Zähl have worked as a duo since 2008. Their concert programmes focus on music from the 20th and 21st centuries. The present CD 'zeit(t)räume' is dedicated to works by Karlheinz Stockhausen and Luciano Berio.

Stockhausen's cycle 'Tierkreis' [Zodiac], originally composed for music boxes, is here presented in a version for soprano and piano. Twelve individually created melodies on texts compiled by Stockhausen himself emphasise the primary qualities of the star signs and connect them with their appropriate seasons, times of day, genders, elements, planets, and stages of growth.

Between 1958 and 2002 Berio wrote 14 sequences for various solo instruments. 'Sequenza III', on a text by the Swiss writer Markus Kutter, is the only true vocal composition of the cycle of works in which a wealth of emotional states, which can be expressed by the voice as the natural instrument of [wo]man, is articulated through sounds, syllables and words. The spectrum includes all possible forms of expression from singing and speaking, whispering and shouting, to laughing and crying.

Between 1952 and 1961 Stockhausen composed eleven 'Klavierstücke' [Piano Pieces]. His 'Klavierstück IX" shows, as an example, the characteristic principle of his serial thinking – to arbitrate gradually as well as organically between pairs of opposites: The composition "conveys forms of musical time: periodicity and an entire series of gradations in the aperiodicity. Static, ‘monotonous’ events are transformed into flexible, ‘polytonal’ ones; they are either placed abruptly next to each other or are mixed in constantly new combinations." (Stockhausen)

Berio’s vocal arrangements in 'Quattro canzoni populari' accentuate an important aspect of his musical thinking: the connection to tradition, without neglecting his impulse toward innovation. The special charm which characterises this vocal work grows out of Berio’s careful new interpretation of this traditional, historical folk song material.