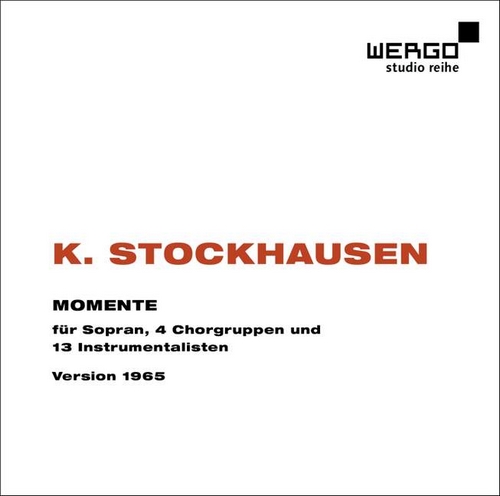 Wergo - WER 67742
Kompozytor
Karlheinz Stockhausen (ur. 1928)
Wykonawcy
Martina Arroyo, soprano, Aloys Kontarsky, hammond organ
Alfons Kontarsky, Lowrey organ
Köln Radio Choir & Members of the Köln Radio SO / Karlheinz Stockhausen
"Though performances have remained rare events, Momente, for soprano solo, four choral groups and 13 instrumentalists, is one of Karlheinz Stockhausen's greatest achievements. It's one of the pieces, along with works such as Gesang der Jünglinge, Gruppen, Stimmung, Mantra and the first of his operas, Donnerstag aus Licht, in which Stockhausen marked out the trajectory of his musical development, and demonstrated the power of his compositional techniques as they evolved. In Momente, those techniques concerned his concept of "moment-form", in which a conventional musical narrative was replaced by a series of self-contained musical units of widely differing lengths and types, whose order could be left to the performers' discretion.

Momente was premiered in 1962 in Cologne in an incomplete version, but became more widely known a decade later in the so-called Europa version, for which Stockhausen composed more material and added a completely new opening section; performances of that toured widely (including to the Festival Hall in London) and was released by Deutsche Grammophon, a recording that is now available as a CD from Stockhausen Verlag. This 1965 version, which first appeared on a Wergo LP, comes somewhere between the original and the final 1972 one. While it lacks the theatricality of the opening that Stockhausen later devised, it contains much of the work's most thrillingly inventive writing, as the choruses cheer, clap and play improvised percussion instruments, as well as joining the soprano (Martina Arroyo) in passages from the Songs of Songs, William Blake and an anthropological text, and supported by brass, percussion and two electric organs.

Momente is part oratorio, part 1960s happening, and some of its flamboyant gestures look forward to Stockhausen's huge opera cycle, Licht, which he began a decade later. That element is less pronounced in this 1965 version than it is in the Europa, but what comes over forcefully even here, in this slightly distant Cologne radio recording, is the exuberance of the work, its abundant invention and originality, which make it totally unlike anything else being written in Europe at that time." Andrew Clements, The Guardian, 26th March