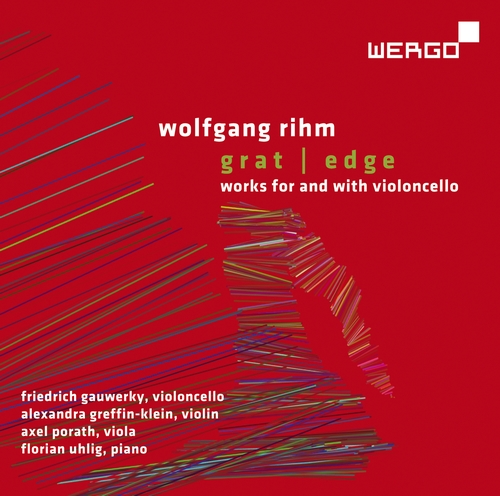 Streichtrio No. 2
Grat
von weit
duomonolog
Streichtrio, Op. 9
Wolfgang Rihm is one of the world’s most performed and prolific composers. In 1972, he not only graduated from high school but also completed Germany’s state examinations for composition and music theory.

Rihm and the cellist Friedrich Gauwerky (who is one year older) met in 1968 when they were roommates for a week at a competition for young musicians in Erlangen. This was the beginning of a life-long friendship. Gauwerky has performed his friend’s music throughout his career, especially the “wild and unbridled” virtuoso solo work, “Grat”.

Like Rihm, Friedrich Gauwerky quickly became an internationally celebrated star: as a soloist for works by the New Complexity composers and also as a member of distinguished ensembles such as Ensemble Modern (as principal cellist) and the Elision Ensemble in Australia. Gauwerky has taught at a number of German music universities as well as at the Darmstadt Summer Courses.

Gauwerky says of his friend Wolfgang Rihm, “As a composer he almost always comes up with something unexpected, unpredictable, and new. This may be because he is so open and curious, unlike some composers who continue to churn out the same material because they once had success with it. I have tried to illustrate the broad spectrum of his compositional activity with the works on this CD.”

On the occasion of Wolfgang Rihm's 70th birthday on 13 March 2022, Friedrich Gauwerky has recorded a very personal homage to his friend in the studios of Deutschlandfunk Cologne, including the early, yet unedited "Streichtrio Nr. 2", which reveals allusions to Alban Berg's lyrical dodecaphony, as well as the two first recordings of "duomonolog" and "Streichtrio op. 9".
Recording: 19–21 November 2021, Deutschlandfunk Kammermusiksaal, Köln.