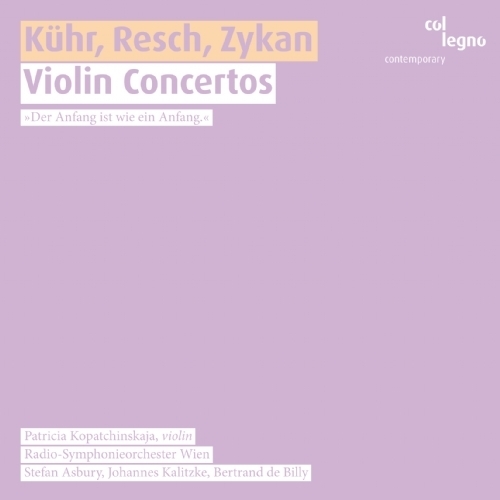 There is little doubt that Patricia Kopatchinskaja, a bundle of energy of Moldavian extraction, is one of the most exciting violinists and, in fact, musicians of our day. Whenever she steps onto the stage and puts bow to string, she ignites the passion of her audience. No wonder then that three eminent Austrians composers of three different generations have felt the draw of this authentic and serious violin virtuoso. The present recording features three violin concertos all which were composed for and first performed by Kopatchinskaja in collaboration with the RSO Wien, which is arguably Austria’s best address for contemporary music.

In his Movimenti für Violine und Orchester (2006), Gerd Kühr (b.1952) explores traditional forms before eventually breaking them apart. Fully aware of the exceptional gifts of the violinist, Gerald Resch (b.1975) adjusted his “Schlieren” für Violine und Orchester (2005) to the special creative approach of Kopatchinskaja (who is also a composer). ...

... Otto M. Zykan (1935–2006) created a large concerto in “romantic” tradition at its best. His Da drunten im Tale – Konzert für Violine und Orchester (2004) is based on the homonymous song by Brahms (a part of which both conductor and violinist begin to sing toward the end of the concerto). Zykan’s und Kopatchinskaja’s different dramatic approaches meet and merge in this piece, as do their penchants for contemplation. It is with great pleasure that col legno releases these three concertos on a single CD, thereby recording for posterity magic moments in contemporary Austrian music making.