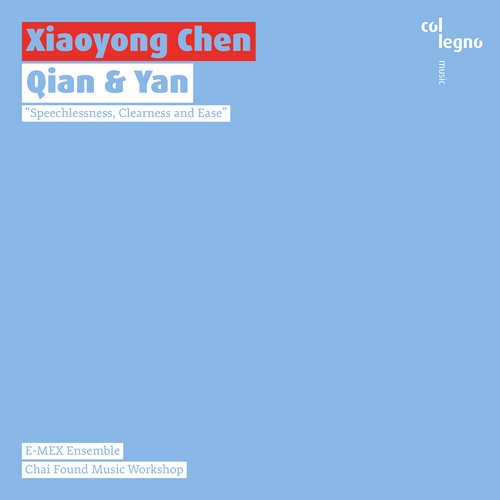 Wasserzeichen
Yang Shen
DUI and HUA
Speechlessness, Clearness and Ease
Qian & Yan
In his music, Xiaoyong Chen likes to strike a constant balancing act between his origins in Beijing and Hamburg, which he has made his home, where he studied with Gy rgy Ligeti, and where he has been teaching composition and intercultural mediation since 2013. His compositions are, in a manner of speaking, “westeastern travelling parties”: To the classical inventory of European instruments, he introduces the sounds of Chinese instruments that have several thousands of years of history to them. Among those are the sheng, a mouth organ, the guzheng, a plucked zither, the pip , the four-stringed “Chinese lute”, and the yangqin (similar to a Western dulcimer). Chen brings the occasionally resulting sharp cultural differences, the seemingly incongruent musical material, and his understanding of music all together in a melting pot. From all of this, he creates fascinating and ever-new, original, serious concoctions. As part of this process, Chen asks: “Will the art of the future be based on tradition?”, only to add, matter-of-factly: “If so, why?”
Recording: DLF Köln, Germany, September 24th – 27th 2018.