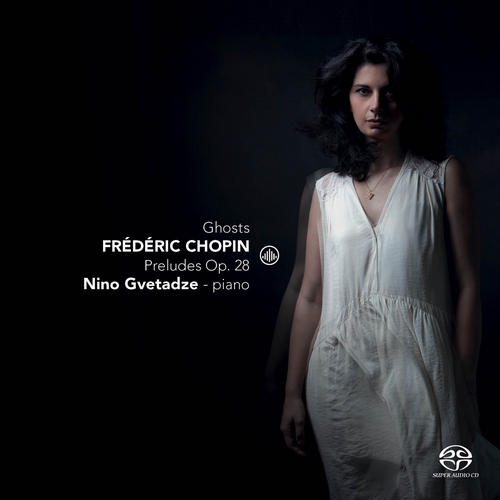 Preludes, Op. 28
Etude in E-flat Minor, Op. 10, No. 6
Waltz in A flat Major, Op. 69, No. 1
Waltz in A Minor, Op. 34, No. 2
Waltz in B Minor, Op. 69, No. 2
Scherzo No. 2 in B-flat Minor, Op. 31
Nino Gvetadze: “Chopin looked back and evoked for us the story of his life in his 24 Preludes. Through the medium of these works he revealed his deepest fears and sorrows, but also the beauty and integrity of his heart. The story of these ghosts culminates in tolling bells which are, in Cortot’s words, “of blood, of earthly pleasure, of death...” But what follows? A pause: silence, timeless solitude, in the Etude Op.10, No.6. Then, suddenly, the soul wakes up and waltzes into space. The album ends with the Scherzo No.2, “like a charnel house”, or house of the dead, as Chopin apparently described the opening – yet the finale sounds like a celebration of life. And so our ghostly journey ends with fireworks, with smiling and shining, looking far into the future...”

Winner of Borletti Buitoni Trust in 2010, her previous recordings have been acclaimed by the critics: “outstanding and magical” (The Independent) “…in the very act of playing she is spontaneously creating the Music under her fingers.” (BBC Music Magazine).
Recorded at Muziekgebouw Frits Philips Eindhoven, the Netherlands, 12 - 14 June 2017