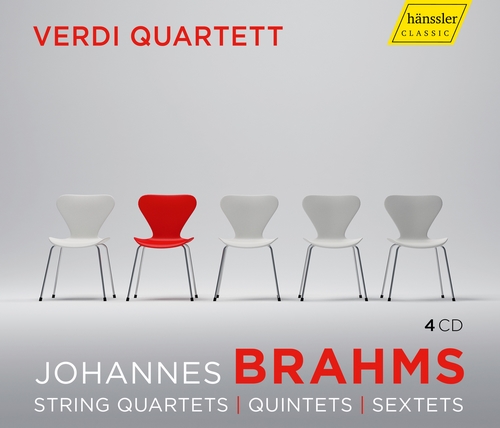 CD 4:
Clarinet Quintet in B minor, Op. 115
String Quartet in B-flat major, Op. 67
Time and again the four members of the Verdi Quartet have successfully communicated their own enthusiasm to their audiences, for instance at the great festivals at Schwetzingen, Ludwigsburg and Zermatt, the Mozart Festival at Lille (France), the Orlando Festival in Kerkrade (Netherlands) and the Bach Festival in Oregon, where they were appointed Quartet in Residence. Their national and international commitments have taken the quartet to virtually all the leading concert venues, not only in Europe but also in the USA, Canada, Africa and South Korea. They have appeared with eminent performers such as Norbert Brainin, Siegmund Nissel and Martin Lovett, Bruno Giuranna, Alfredo Perl, Günter Ludwig, Rudolf Meister and Matthias Kirschnereit. Since 2003, the quartet has had a festival of its own, “vielsaitig” in Füssen, a mixture of concerts, chamber music and solo master classes, as well as a symposium for string instruments making. The members of the quartet are also soughtafter teachers. They teach singly and as a group at the academies in Mannheim and Rostock, and at workshops in many of the world’s countries.
Recording: 2001 – 2008, Deutschlandfunk, Kammermusiksaal