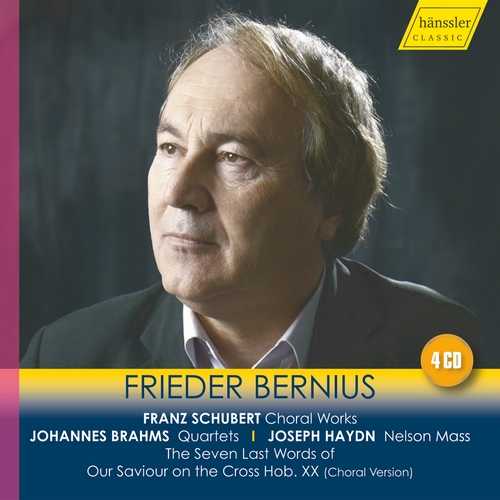 CD 4:
The Seven Last Words of Our Saviour on the Cross, Hob. XX (Choral Version)
FRIEDER BERNIUS acquired early access to Bach’s organ music, violin compositions and choral works already in the family home, a pastor’s residence. As a student at the Stuttgart College of Music, he initially responded to the city’s “Romantic” Bach tradition, but soon he had been more and more committed to the historical approach to performance that he has maintained to this day.

As founder and director of the Stuttgart Chamber Choir, the Stuttgart Baroque Orchestra, the Stuttgart Hofkapelle and the Klassische Philharmonie Stuttgart, he is known and appreciated for his sure grasp of style across the centuries. Vocal works by Monteverdi, Bach, Handel, Mozart, Beethoven, Fauré and Ligeti, music for the theatre by Mendelssohn, symphonies by Haydn, Burgmüller and Schubert – his interpretations are always oriented upon the ideal sound of the original, while retaining their personal tone. He has since been the guest of many renowned European festivals and has performed some 80 of Bach’s cantatas and most notably his Motets, the B minor Mass and the St Matthew Passion (Salzburg, Vienna, Bruges, Madrid, Paris, Barcelona and Munich)