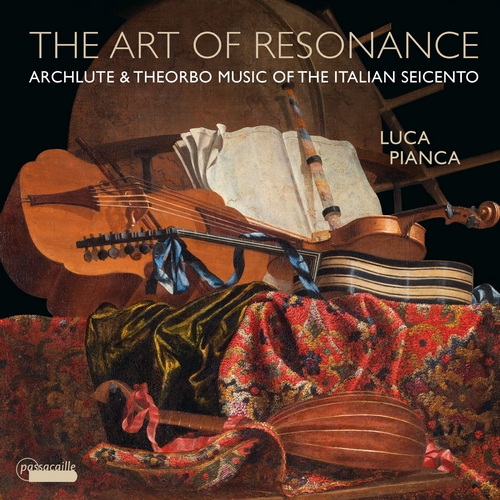 Alessandro Piccinini:
Toccata VII
Gagliarda III
Toccata IV
Aria di Follia Romanesca
Toccata XI
Corrente II
Ciaccona
At the beginning of the 17th century, music in Italy underwent a radical change. From the first experimental attempts in Florence to revive the musical practice of Greek antiquity, which had not been handed down in detail, the genre of the monody developed, in which the singer could finally express all the nuances of the text (the "affects"), freed from the strict constraints of polyphony. To accompany this monophonic singing, new types of plucked instruments emerged, such as the archlute and the theorbo, characterised especially by their powerful bass registers and intense resonances.

The new expressive demands invited playing with timbres, (de)crescendi and agogics to convincingly portray human passions, elements that were also applied to purely instrumental music, as in the works on this recording. The rigour of polyphony gave way to a style based more on improvisation, an aspect particularly important to Luca Pianca in his interpretation of solo works for archlute and theorbo by Piccinini, Kapsberger, Melli and Raimondo.
Recording: Oratorio di San Rocco, Manno (CH), October 2021. Instrument by Luc Breton (Vaux-sur-Morges).