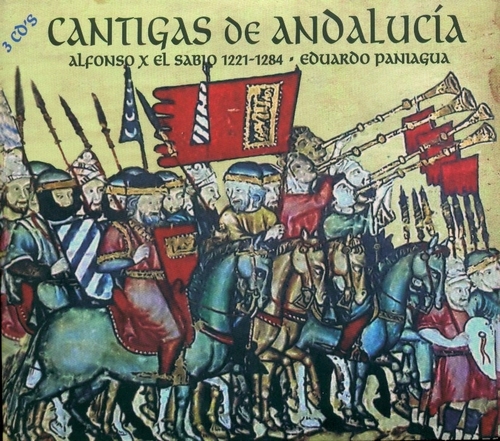 CD 1 - Cantigas Of Granada & Jaén:
The Relics
The Castle of Chincoya and The King of Granada
The Child of Coria
The Treasure
The Image of Martos
Wind and Hail
Don Manuel's Falcon
Abu Yusuf Thwarted in Marrakech

CD 2 - Cantigas Of Córdoba & Huelva:
Struck by a Stone
The Child and the Abbot
The Altar Cloths of Ayamonte
The Captive Son
The Virgin of Cordoba
The Child of San Marcos
The Judge of Spain
Blocks of Stone
The Child of Tudia
Between the Two Seas
From Lucena to Sopetran, Captive in the Land of the Moors

CD 3 - Cantigas Of Cádiz & El Puerto de Santa María:
Garden of Delights (Dona Sancha)
CSM 367 - Don Alfonso's Terrible Disease
CSM 372 - The Woman of Niebla
CSM 368 - Mary of Cordoba and Santa Cruz de Cadiz
CSM 389 - Master Pedro of Marseille
CSM 378 - San Salvador of Seville
CSM 384 - Fror das Frores (Painter of Three Colours)
The Thief Who Swore Falsely in El Peurto de Santa Maria
Alfonso X, justly known as the Wise, was an eminent poet, historian and musician. A scientific intellectual, he was learned and curious and created a body of knowledge that was unequalled in his time. He considered his work to be a tribute to humanity in close communication with God. As a protector of the wise and active publisher, he revised and corrected books himself, improving their language and style, and illustrating them with beautiful miniatures. He chose the Romance vernaculars (Castilian and Galician) instead of Latin for literary and artistic expression.

The Cantigas de Santa Maria form a collection of 427 hymns on the subject of miracles through the intercession of the Virgin Mary, and are Alfonso’s great poetic work. They are based on the extensive European repertoire of miracles of the Virgin, which were prepared to be sung to melodies created with beautiful musical notation in parchment codices featuring excellent miniature paintings.

The Cantigas are a "spiritual autobiography" of Alfonso X (Snow), expressing his hope that the Virgin, as his advocate, would intercede for his success as King and for his salvation after death. The Cantigas provide a valuable historical source and testimony to facts written in the first person, with contemporary events and details of how Alfonso suffered in body and soul as an indication of his illnesses (cantigas 209, 235, 279, 354, 366 and 367).

This selection of Cantigas of Andalusia is from the last of the codices. They reflect Alfonso’s wish to expel the Moors from Spain and the wars against Granada and Morocco (Cantigas 169, 181, 215, 323, 345, 360, 401 and 406). Some of the 24 cantigas of the sanctuary of El Puerto de Santa Maria that had not yet been recorded have also been included.

These cantigas in Andalusian territory complete the cantigas recorded and published earlier by Pneuma: Cantigas de Sevilla PN2-590, Cantigas de Jérez PN-570, Puerto de Santa Maria 1 PN-220, Cantigas de Murcia PN-1560 and others contained in the CDs Remedios Curativos PN-240, Bestiario PN-340 and Cantigas de Extremadura PN-420. In general, the themes of these cantigas are closely related to the biographical events of the King and his court in Seville.
Recorded in 2018 by Hugo Westerdahl.