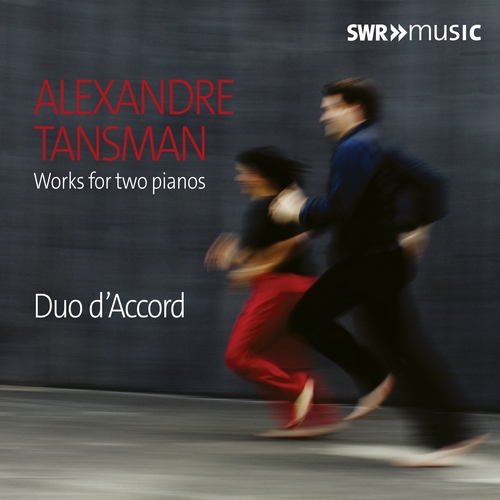 The Duo d'Accord is one of today's most inventive 2-piano ensembles, famous for its unique repertoire and flawless interplay. This is their third album on SWR Classic.

In terms of quality and inventiveness, the works on this album might be compared to those of Maurice Ravel.

Alexandre Tansman is one of the few major 20th-century composers yet to be fully appreciated. No other composer seems to have written as many works for piano duo. As a largely forgotten composer, Alexandre Tansman receives an occasional nod for his astounding output, but is never pursued further. We still lack a representative number of recordings and a wider survey of the most important stages of Tansman’s biography.

Born in Poland into a Jewish family with Francophile tastes, Tansman had unlimited access to Europe's wealth of musical, philosophical and humanistic cultures. His composing techniques comprised those of various periods, cultures and styles with virtually chameleon-like adaptability, always eager to try something new. At the same time his compositions do not give the impression of banal imitation; they integrate superb craftsmanship, extraordinary imagination and a distinct artistic concept. On the other hand, Tansman’s impressive command of many different styles and techniques also means that it is impossible to identify a typical “Tansman sound”, a distinct individual trademark that runs through his output. This recording aims to present the essential components of his music – versatility and quality – and duly reflect the high standard set by his compositions for two pianos.
Recording: 24.–27.07.2017, Stuttgart, Funkstudio SWR