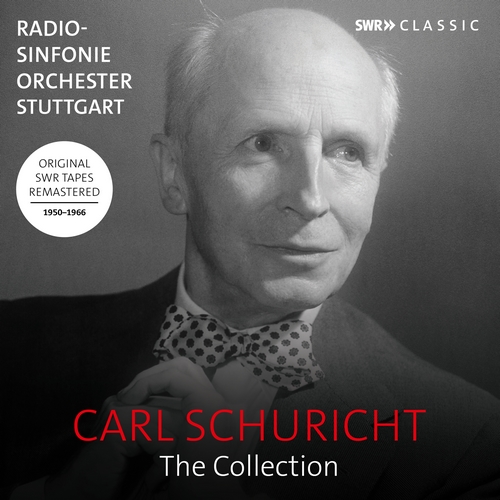 CD 6:
Anton Bruckner:
Symphony No. 5 in B flat Major

Franz Schubert:
Sinfonie No. 5 in B flat Major D485

Max Reger:
Variations and Fugue for Orchestra on a theme by Johann Adam Hiller Op. 100

Richard Wagner:
Rehearsal fragment from "Parsifal"
Together with Wilhelm Furtwängler, Otto Klemperer, Bruno Walter, Erich Kleiber and Karl Böhm, Carl Schuricht belonged to the generation of German conductors who were born before the turn of the 20th century. They were trained as conductors in classical-romantic symphonic repertoire and the then contemporary music of late Bruckner, Gustav Mahler, Richard Strauss and Max Reger. Schuricht always remained totally faithful to a work's original intent.

He performed mainly symphonic works from the Classical and Romantic eras – Haydn, Mozart, Beethoven, Brahms and Bruckner, as well as Schubert, Schumann, Mendelssohn, Liszt, Tchaikovsky, Richard Strauss and Reger. One might add Bizet and Jacques Offenbach to this list; and of course Johann Sebastian Bach, whose works he frequently performed. Gustav Mahler‘s works engaged and enriched Schuricht throughout his lifetime; this interest took him into the realms of what was then known as “contemporary” music, encompassing the works of Bartók, Hindemith, Pfitzner, Stravinsky, Honegger, Schönberg, Debussy and Ravel.

Today, the archives of the South West German Broadcasting Services (Südwestrundfunk) in Stuttgart house 125 of Schuricht‘s recordings, documenting the majority of his performances. In the 1950’s and 60’s, the diversity of the radio recordings he made of “modern” composers (who nowadays scarcely arouse any attention) reflects the breadth of his interest and his repertoire: works by composers such as Frederick Delius, Aloys Fornerod, Philipp Mohler, Robert Oboussier, Günter Raphael and many other highly regarded compositions of the time – they all found their advocate in Schuricht. This edition has been limited to giving an overview of the major symphonic repertoire of the 18th to the early 20th centuries.

Schuricht’s charismatic interpretations intensified in his old age, when he seemed to overcome his physical handicaps through the sheer strength of his artistic presence. He understood how to transmit his musical intelligence, his skill and his interpretation of a work directly to the musicians with whom he worked.
Recordings: 1950–1966