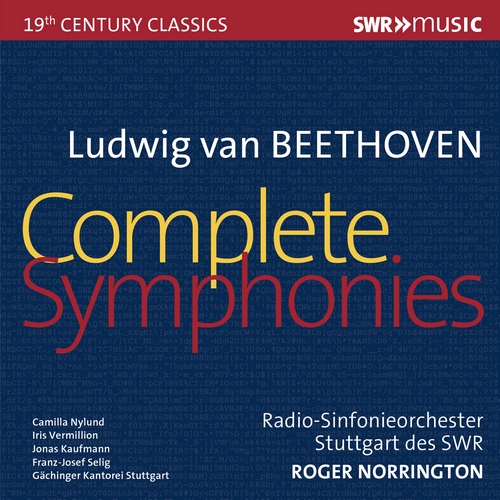 CD 5:
Symphony No. 9 in D minor, Op. 125 - Final chorus from Schiller's “Ode to Joy”
In recording Ludwig van Beethoven's nine symphonies with the SWR Radio Symphony Orchestra Stuttgart, its principal conductor Sir Roger Norrington presented a summary of his life-long work with the composer's music. He applied the insights of historically informed performance to a modern symphony orchestra. For Norrington, historically informed performance does not mean making exclusive use of historical instruments, but includes remaining as faithful as possible to phrasing, articulation and dynamics, and following the tempi prescribed by Beethoven himself.

During the 2002 European Music Festival, Norrington and the Radio Symphony Orchestra Stuttgart set out to prove that a modern symphony orchestra could play the nine symphonies in accordance with the most recent “artistic findings”. Their impressive achievement filled the Stuttgart audience with enthusiasm for its sensational and revelatory performances. The live recordings of the symphonies made during the five concerts document the astonishingly high level at which the orchestra performed.