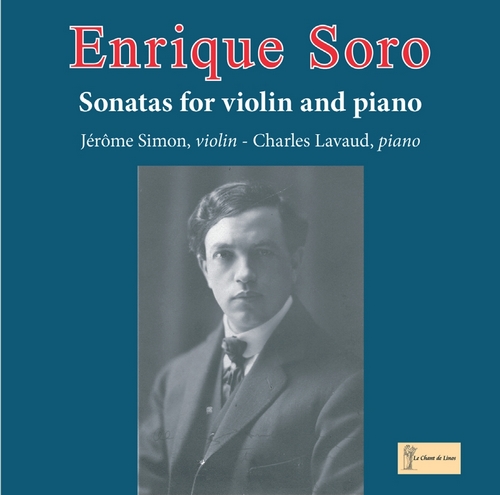 Soro: Sonatas for violin and piano

Le Chant de Linos - CL 18141
Kompozytor
Enrique Soro (1884-1954)
Wykonawcy
Jérôme Simon, violin
Charles Lavaud, piano
Sonata for violin and piano in D minor
Sonata for violin and piano in A minor
Enrique Soro Barriga (1884-1954) was born in Concepción, a city in the South of Chile. There, he received the first music lessons from his father Giuseppe, an Italian musician living in Chile since 1870. The precocity and talent shown by the young Soro (his first work date from 1890 and his nickname in elementary school was «little Chopin») convinced his mother Pilar to carry out the necessary actions to obtain a scholarship from the Chilean Government to study in Europe. Finally, after lengthy process, he traveled to Italy at the beginning of 1898, and after passing the admission tests, he enrolled in the Milan Conservatory, where his father had studied. There, Soro achieved such notoriety and level of excellence that in 1904 he received the Grand Prize for the best student of his generation upon graduation. He returned to Chile in 1905 with more than 60 works of his authorship. He entered the National Music Conservatory of Santiago as a teacher, where he became its director in 1919. Through his tireless activity, he collaborated in the creation of an enriching and fruitful musical environment. On his first trip to New York (1915-1916) to direct his «Anthem to the 1st Pan-American Scientific Congress», he performed his music in different places, including Carnegie Hall where he gave a concert. He also made contact with the publisher G. Schirmer, who, between 1917 and 1938, regularly published his music, allowing his work to be known in various parts of the world. He even registered his works for the Aeolian & Co. player pianos. In 1922-1923, on his second trip to Europe he met with famous European musicians (Casals, Busoni, Paderewski, Rubinstein, Mascagni, Massenet and others) and made arrangements for the Philharmonic Orchestra of Berlin to perform three of his most important symphonic works. Throughout his musical life he created more than 200 works for solo piano, and about 30 works for chamber music, including two sonatas for violin and piano, one for cello and piano, two suites for two pianos, a trio, several quartets, quintets and sextet, as well as several compositions for small orchestra. In addition, Soro composed works for voice and piano, and choral music, including more than 10 hymns. His symphonic output encompasses around 20 works, among which the «Gran Concierto en Re mayor para piano y orquesta” (1918), the «Suite Sinfónica n°2» (1919), the «Sinfonía Romántica en La mayor» (1921), the «Danza Fantástica» (1928) and the «Tres Aires Chilenos « (1942) stand out.

In 1948, he received the National Art Award in the music category. In 1954 he died unexpectedly from complications of surgery in Santiago, Chile. Undoubtedly, with his death, Chile lost one of its fundamental pillars in classical music, whose work has had an impact both on the history and development of Chilean music as well as the training of new performers.
First recording of these works