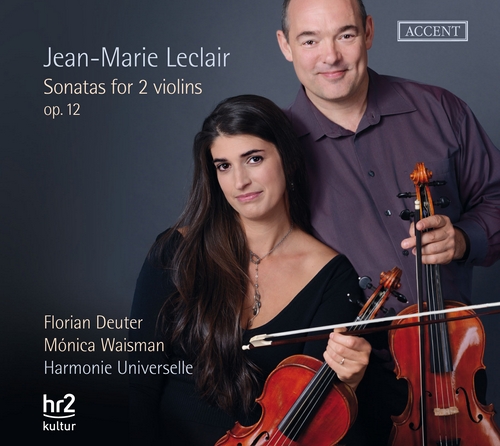 Sonatas for 2 violins
op.12
Anyone familiar with only the most basic data con - cerning Jean-Marie l eclair, who was born in l yon in 1697 as the son of a basket maker and murdered in October 1764 in his flat in a gloomy Parisian suburb, could never have imagined that he was one of the greatest violinists of the 18th century. Ten years be - fore his death, l eclair‘s musician colleague Charles- h enri de Blainville described him as the Corelli of France; at the same time, he was immortalised in g ermany with a composition analysed with great admiration in the Abhandlung von der Fuge (Dis - course on the Fugue), in which Friedrich Wilhelm Marpurg especially paid his respects to Johann s e - bastian Bach for his excellence in music theory. Unlike his father, who only practised music during his leisure hours, Jean-Marie l eclair “l’aîné” – “the elder”, because there was also a brother of the same name, six years younger – made music his profession. Jean-Marie had barely reached legal age (for those days) when he married in 1716 – he was a dancer at the Académie de Musique of l yon as was his chosen one, Marie-Rose Casthagnié. s ix years later he went to Turin as a ballet master, which at that time was a profession inconceivable without a violin in one’s hand. i n that city, he was also involved in the composition of the stage works to be performed there. l eclair’s main reason for moving to the i tal - ian Piedmont was most likely the awareness of his own talent as a violinist; he was able to perfect his technique there under the tutelage of g iovanni Bat - tista s omis, a late pupil of the Roman violin master Arcangelo Corelli. l eclair’s patron at that time was the Royal Treasurer in l anguedoc, Joseph Bonnier, who probably also granted him access to the mu - sical scene in Paris, where he received composition lessons from the organist André Chéron, two years his senior.