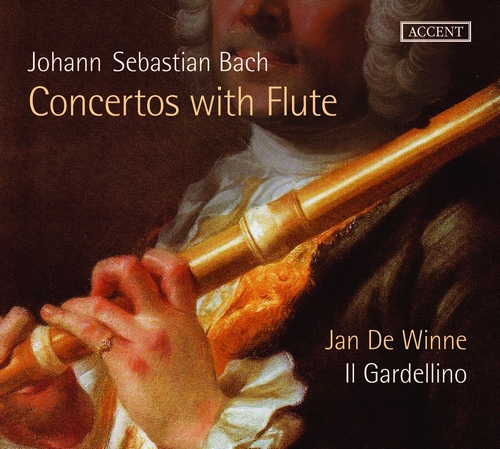 Orchestral Suite No. 2 in B minor, BWV 1067
Brandenburg Concerto No. 5 in D major, BWV 1050
Triple Concerto in A minor, BWV 1044
In the 18th century, each composer of distinction and name composed works for the transverse flute: Antonio Vivaldi, Georg Philipp Telemann, Georg Frideric Handel and also Johann Sebastian Bach, who had the opportunity to meet Quantz on several occasions. As is so often the case, his flute compositions are deemed to be the culmination of their times, not only because of their contrapuntal content, but also because of the tremendous technical difficulties confronting the flute player. In some cases, Bach pushes the boundaries of the flautistic possibilities of the time to their utmost limits, making full use of the tonal range of the instrument and even leading the transverse flute into its remotest key ranges.

In addition to solo works (the Partita BWV 1013 and a set of flute sonatas), Jan De Winne presents on this recording concertos in which the transverse flute plays a crucial role: the Orchestral Suite No. 2 BWV 1067 (a “must” in the repertoire of any flutist), the Brandenburg Concerto No. 5 BWV 1050, and the Triple Concerto BWV 1044.
Recorded in Église Saint Apollinaire, Bolland (Belgium) on 2-6 July 2017. Played on Hendrik Jacobs, 17th c. - violin; Thomas & Barbara Wolf, 1988, after Christian Vater, 1738 - harpsichord.