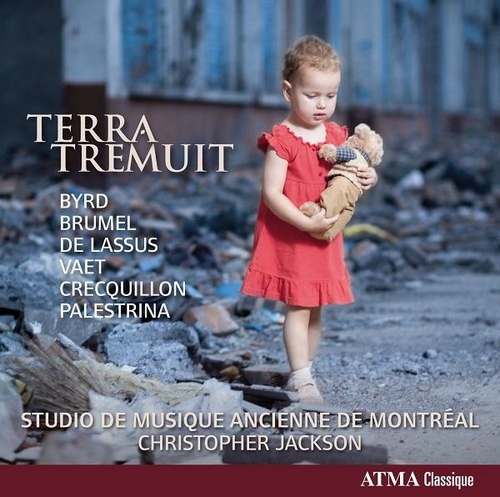 Roland de Lassus (v.1532-1594):
Motet Timor et tremor with 6 voices
To mark the 40th anniversary of the Studio de musique ancienne de Montréal, ATMA presents Terra tremuit featuring Antoine Brumel’s mass Et ecce terrae motus (Lo, the earth shook) for 12 voices. Considered to be the most original of his compositions, Et ecce terrae motus was probably written around 1497, and is preserved in a manuscript copy made by de Lassus for a performance in Munich in the 1570s, some 50 years after Brumel’s death.

Also featured on this CD are motets by Jacobus Vaet and Thomas Crévillon, who belonged to the generation of Franco-Flemish masters that followed Brumel’s. Listeners will also discover Terra tremuit, a motet whose title alludes to the earthquake that marked the death of Jesus. Several great composers of the late Renaissance set this text to music, including G. P. da Palestrina, who was maestro di cappella at the Cappella Giulia, the papal choir at Saint Peter’s in Rome until his death in 1594; and William Byrd, organist at England’s Chapel Royal under both Elizabeth I and James I.

The Studio de musique ancienne de Montréal has established a reputation as Montréal’s finest early music vocal ensemble. Composed of 10 to 13 singers chosen for the remarkable clarity and purity of their voices, the Studio was founded in 1974 by the organist and harpsichordist Christopher Jackson, whose inspired leadership continues to this day.