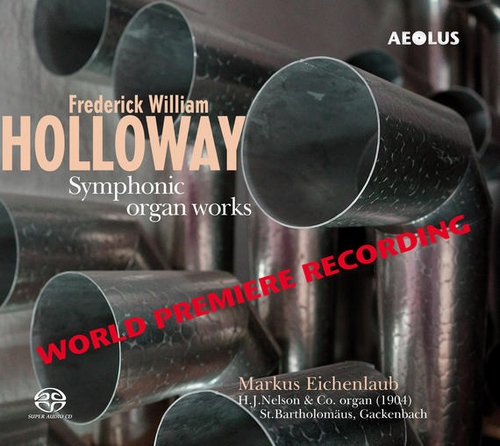 It is the merit of the artist Markus Eichenlaub to dedicate a complete CD recording to this (almost completely) forgotten composer. Stylistically Holloway's works can hardly deny their British origin. However, what the trained ear will notice are numerous reminiscences of large French colleagues. You can hear Franck, Widor, and especially Alexandre Guilmant, and in the large-scale symphonic works there are even little echoes of Bruckner.

No wonder: in Holloway's former workplace, the Crystal Palace, burnt down in 1936, many famous contemporaries played concerts. The organ used for the present recording also comes from England, but has meanwhile found its home in Germany. The instrument built by H.J.Nelson (1904) is located today in Gackenbach in the Westerwald and has been meaningfully enlarged according to plans by Ralf Cieslik over the past few years, while almost exclusively historical pipe work was used. The instrument is extremely versatile and a stunning "power machine". In 2009, an English-style high-pressure tuba based on original models was installed. Music, artist and instrument form a very successful unit!
H. J. Nelson & Co. Organ (1904), St. Bratholomaus, Gackenbach