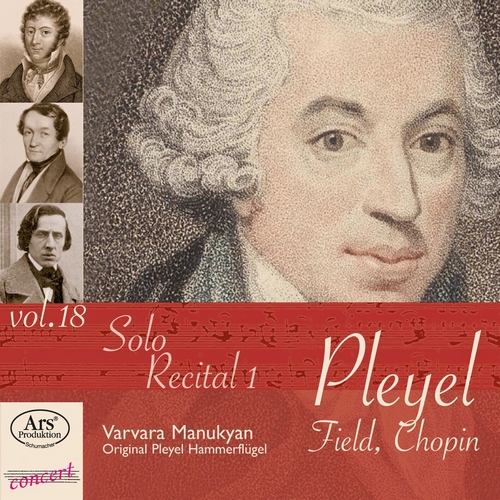 Chopin:
Trois Nocturnes Op. 9
Considering Ignaz Pleyel’s complete oeuvre, his works for solo piano are not so numerous like in the oeuvres by Haydn, Wanhal, Kozeluch, Clementi, Mozart or Dussek. Pleyel’s varied piano chamber music (48 piano trios and 15 violin sonatas (violin & piano)) proves his preference for this genre, obviously an inspiration during his youth. However, his mastery in composing appears also in his works for solo piano, such as the sonatas Ben 571, 572, 601-670 and in his own arrangements of his chamber music like the Sonata in three movements V, G major, Ben 332, 1786, which is recorded on this CD. This sonata is played in a subtle way by the pianist Varvara Manukyan on a grand piano of Camille Pleyel. Compared with other grand pianos of that time, this one has the finest and leanest sound, due to its very thin soundboard, its thin strings and little lightweight hammers.
Recording: Pleyel Kulturzentrum – Concert Hall, 9.-10. Juli 2018. Played on original Pleyel Hammerflügel 1838, op. 5884