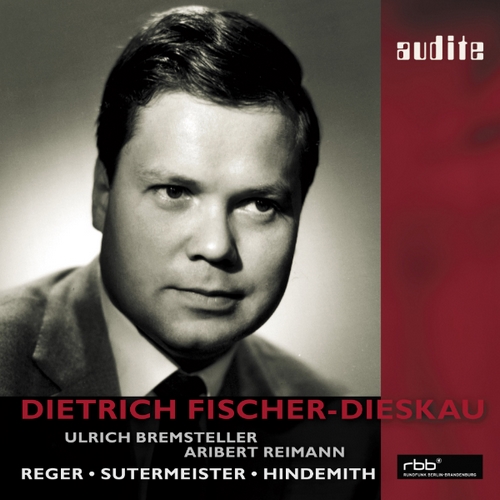 Celebrating Dietrich Fischer-Dieskau's 85th birthday, audite is issuing a four-part "birthday edition", adding studio and live concert recordings made between 1951 and 1989 to an already existing nine-CD audite Fischer-Dieskau edition. The releases from the archives of the RIAS and the Sender Freies Berlin document the unequalled quantitative and qualitative spectrum which Fischer-Dieskau acquired during the five decades of his career. They offer a fascinating insight into the breadth of Fischer-Dieskau's repertoire as well as his artistic approach, with which he maintained a careful balance of development and continuity until the end. These recordings - spanning Beethoven's sacred songs Op. 48 of 1806, through Schumann, Brahms, Mahler and Reger, to Heinrich Sutermeister's expressive psalm setting of 1948 - demonstrate the combination of personality and musical character which was essential for Fischer-Dieskau. Not only do they document the artistic partnership with pianists such as the unforgotten Hertha Klust, Daniel Barenboim, Cord Garben, Aribert Reimann and Tamás Vásáry, but also the delightful collaboration with the organist Ulrich Bremsteller. Furthermore, Dietrich Fischer-Dieskau can be heard together with his wife and musical partner, Julia Varady.The term of document applies to this edition both in the sense of an historic and an artistic legacy. It reveals the riches of the lied repertoire from the last two centuries which Fischer-Dieskau, in his role of musical chronicler, has made accessible for the present age and it is an impressive record of an incomparable interpretational art, according to which word and music were always treated and realised as a unit.There is a "Producer's Comment" from producer Ludger Böckenhoff about three productions at:http://www.audite.de/en/download/file/272/pdfhttp://www.audite.de/en/download/file/273/pdfhttp://www.audite.de/en/download/file/274/pdfThe production is part of our series "Legendary Recordings" and bears the quality feature "1st Master Release". This term stands for the excellent quality of archival productions at audite. For all historical publications at audite are based, without exception, on the original tapes from broadcasting archives. In general these are the original analogue tapes, which attain an astonishingly high quality, even measured by today's standards, with their tape speed of up to 76 cm/sec. The remastering - professionally competent and sensitively applied - also uncovers previously hidden details of the interpretations. Thus, a sound of superior quality results. CD publications based on private recordings from broadcasts or old shellac records cannot be compared with these.