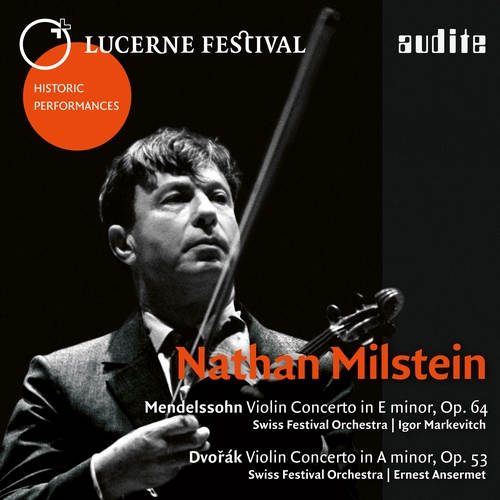 Dvorak:
Violin Concerto in A Minor, Op. 53
His vigorous, intensive tone; his unsentimental, straightforward playing; his boundless virtuosity: these are the trademarks of Nathan Milstein, a violin giant of the last century. Two Lucerne concert recordings from the 1950s, issued here for the first time, featuring the violin concertos of Felix Mendelssohn and Antonín Dvořák, displaying "Nathan the Great" at the height of his art. Conducting: Igor Markevitch and Ernest Ansermet, whose discographies until now have not featured these works.

Milstein had a particular fondness for Dvořák's A minor concerto: in his performance of 6 August 1955, conducted by Ernest Ansermet, the music is ablaze, everything is highly charged. The Mendelssohn concerto was another favourite which Milstein recorded several times. His Lucerne performance of 12 August 1953 alongside kindred spirit Igor Markevitch seems unusual even today. Milstein's tone is piercingly intensive, relentless, unsentimental and yet consumed with grief: high-octane music-making. Added to that are fast tempi, a sinewy tone and razor-sharp accuracy in the realisation of filigree figurations. All this seems positively modern. But for exactly that reason Milstein, who was born on 13 January 1904 as a son of a Jewish family in Odessa and who studied with Pyotr Stolyarksy in Odessa, Leopold Auer in St Petersburg and Eugene Ysaye in Brussels, met with a sense of disconcertment from certain contemporaries. Although considered "capable of magical things upon a violin", his playing was also, at times, regarded as overly cool.

Milstein performed at the LUCERNE FESTIVAL from 1949 - in contrast to Germany where, on account of the crimes committed by the Nazis, Milstein would not perform until 1966, Switzer­land was an unburdened territory for him. He had already travelled to Lake Lucerne several times during the 1930s in order to visit his friend Sergei Rachmaninov in Hertenstein. And he had also been present at the festival's birth on 25 August 1938 - Arturo Toscanini's legendary gala concert at Tribschen. The fact that Milstein became a musician at all was thanks to the efforts of his mother who had chosen the violin for her four-year-old who preferred football. But Milstein must have been naturally gifted as he later stated that violin technique was not difficult and that he had conquered it at the age of seven: "It is the music which takes years, a lifetime, to master."

In cooperation with audite, LUCERNE FESTIVAL presents the "Historic Performances" series featuring outstanding concert recordings of artists who have shaped the festival throughout its history. The aim of this CD edition is to rediscover treasures - most of which have not been released previously - from the first six decades of the festival. These recordings have been made available by the archives of SRF Swiss Radio and Television, which has broadcast the Lucerne concerts from the outset. Painstakingly re-mastered and supplemented with photos and materials from the LUCERNE FESTIVAL archive, they represent a sonic history of the festival.

Two short passages are missing from the original tapes of the Dvořák concerto (7:14 to 7:57 of the second movement and 7:27 to 7:29 of the finale). In order to be able to issue the recording in complete form, these two gaps were covered using the recording of the work made by Milstein, Steinberg and the Pittsburgh Symphony Orchestra.
Recording: August 12, 1953 (Mendelssohn), August 6, 1955 (Dvorák), Kunsthaus, Lucerne