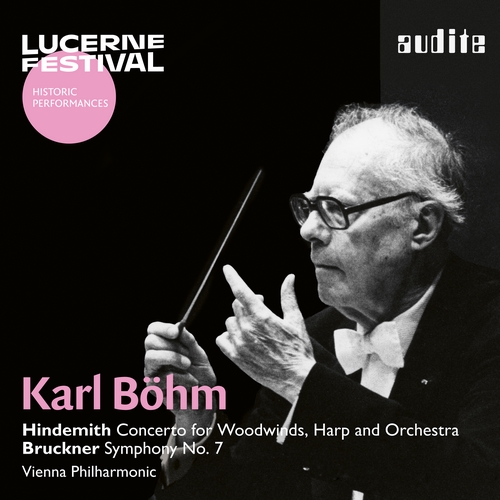 Bruckner:
Symphony No. 7 in E major, WAB 107
Between 1950 and 1980, he was one of the eminent conductors of international standing, and yet in the meantime he has somewhat faded into obscurity: Karl Böhm epitomised the anti-star amongst the great conductors of his time, emphatically at the service of music alone. Now available for the first time are two Lucerne concert recordings made with the Vienna Philharmonic, with whom he was closely associated for decades: Bruckner’s Seventh Symphony alongside a buoyant Hindemith concerto (the latter recorded only once by Böhm).

An advocate for contemporary music in his youth, Böhm performed Paul Hindemith’s Concerto for Woodwinds, Harp and Orchestra (1949) in Lucerne in the summer of 1970. Cast in three movements, this work offers especially rewarding passages to the five-part concertino grouping and, via a quotation of Mendelssohn’s “Wedding March”, refers to Hindemith’s own silver wedding anniversary.

Alongside symphonic works of Mozart, Beethoven, Schubert, Brahms and Strauss, Anton Bruckner’s symphonies were also at the centre of Böhm’s concert repertoire. Böhm’s Bruckner interpretations possess a special aura, though he neither follows the pious, pathos-laden manner of Eugen Jochum, nor the solemn worldly style of Sergiu Celibidache, nor the austere and matter-of-fact interpretations of Nikolaus Harnoncourt. This is also demonstrated by the Lucerne concert recording of the Seventh Symphony, made in September 1964: Böhm never loses sight of the whole, but plays out every articulatory detail as notated, with almost scrupulous textual fidelity. He follows Bruckner’s block-like editing technique without aggressively emphasising it. He does not evade the solemn monumentality of the music, but he also does not exaggerate it into a sense of false, violent pathos.
Live recording at Lucerne Festival (Internationale Musikfestwochen Luzern) - Kunsthaus, Lucerne, September 6, 1964 (Bruckner), September 6, 1970 (Hindemith).