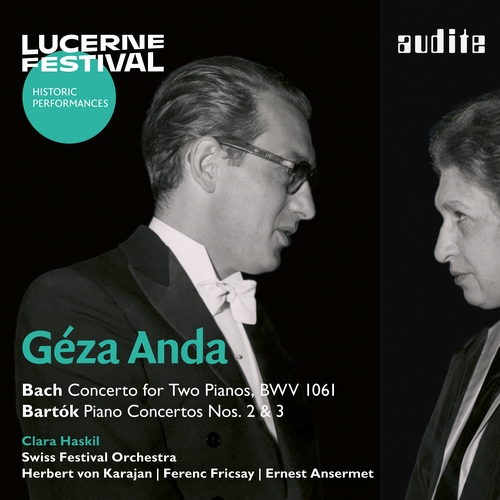 Béla Bartók:
Piano Concerto No. 2, BB 101
Piano Concerto No. 3, BB 127
From 1955 until 1969, Géza Anda performed regularly at the Internationale Musikfestwochen Luzern. Only three recordings from this period have survived and are issued here in their entirety for the first time. These are the Concerto for Two Keyboard Instruments and Orchestra, BWV 1061, by Johann Sebastian Bach, recorded in 1955, and Béla Bartók’s Third Piano Concerto, recorded in 1965. Anda was partnered by Clara Haskil and Herbert von Karajan for the Bach, and for the Bartók by Ernest Ansermet, who on this occasion was appearing for the final time in Lucerne. Also included here is Bartók’s Second Piano Concerto, which Anda played with his favourite conductor, Ferenc Fricsay, before an enthusiastic audience.

In cooperation with audite, LUCERNE FESTIVAL presents the “Historic Performances” series featuring outstanding concert recordings of artists who have shaped the festival throughout its history. The aim of this CD edition is to rediscover treasures – most of which have not previously been released – from the first six decades of the festival, which was founded in 1938 with a special gala concert conducted by Arturo Toscanini. These recordings have been made available by the archives of SRF Swiss Radio and Television, which has broadcast the Lucerne concerts from the outset. Painstakingly remastered and supplemented with photos and materials from the LUCERNE FESTIVAL archive, they represent a sonic history of the festival.
Live recording at Lucerne Festival (Internationale Musikfestwochen Luzern) - Kunsthaus, Lucerne, August 10, 1955 (Bach), August 22, 1956 (Bartók Concerto No. 2), August 25, 1965 (Bartók Concerto No. 3).