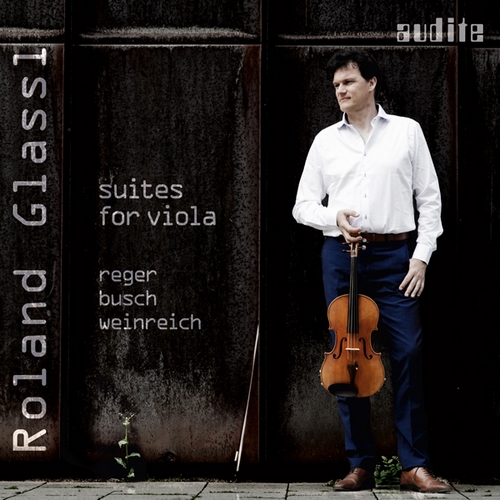 Justus Weinreich:
Suite No. 1 in E-flat major
Suite No. 2 in F major
Suite No. 3 in G major
Roland Glassl, the longstanding violist of the Mandelring Quartet, presents his debut solo album performing suites for solo viola. Bach’s works for solo string instruments were the model, the stylistic and virtuosic possibilities around 1900 the gauge: the works by Max Reger, Adolf Busch and Justus Weinreich were written between 1894 and 1925, so before the great twentieth century flowering of solo and concerto repertoire for the viola. Weinreich’s suites of 1894 are the pioneers: a wonderful discovery and now available as a recording for the first time. Max Reger did not manage to write his planned fourth suite for the violist of the Busch Quartet: Adolf Busch, the leader of the ensemble, fulfilled his friend’s project by composing his own suite. Roland Glassl has established his reputation as a soloist and chamber musician. Numerous prizes at international competitions (including first prize at Lionel Tertis International Viola Competition; first prize at Washington International Competition for Strings; winner of the first International Viola Competition Vienna) as well as sixteen years of playing in the Mandelring Quartet have taken him to many of the great international concert stages and festivals. Roland Glassl studied the violin with Prof. Ana Chumachenco at the Munich Musikhochschule and the viola at Indiana University, Bloomington, USA, with Atar Arad. After his return to Germany he began his career as a chamber musician and soloist. Alongside his intensive involvement with the Mandelring Quartet he has given many concerts with the Trio Charolca and has also continued performing as a soloist. Roland Glassl teaches at the Hochschule für Musik und Darstellende Kunst Frankfurt am Main, whose staff he joined as professor of viola in 2004.