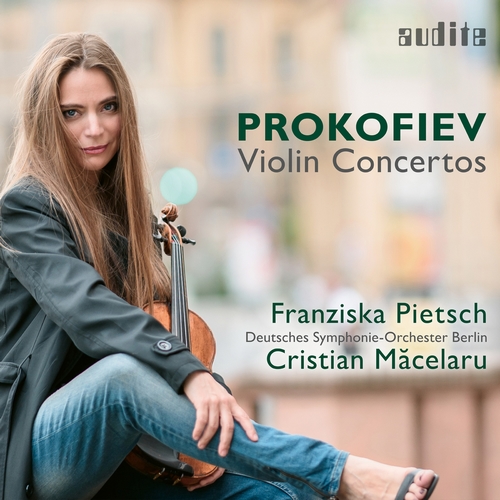 Violin Concerto No. 1 in D Major, Op. 19
Violin Concerto No. 2 in G Minor, Op. 63
?Following Sergei Prokofiev's works for violin and piano, Franziska Pietsch now presents an album featuring both Violin Concertos of the Russian composer, with whose oeuvre and idiom the artist - a former promising star of the GDR - has felt at home ever since her youth. Alongside Cristian Măcelaru and the Deutsches Symphonie-Orchester Berlin she presents a thrilling new recording.

The two violin concertos represent two phases in, and two sides of, Prokofiev's life and work. The first was written during an era of early successes, stylistically and temporally close to his Symphonie classique, but not premiered until he was in exile. The second mirrors the itinerant existence of his life as a musician in exile, but also his longing to return to Russia.
Recording: March 13 - 16, 2017, Jesus-Christus-Kirche, Berlin-Dahlem