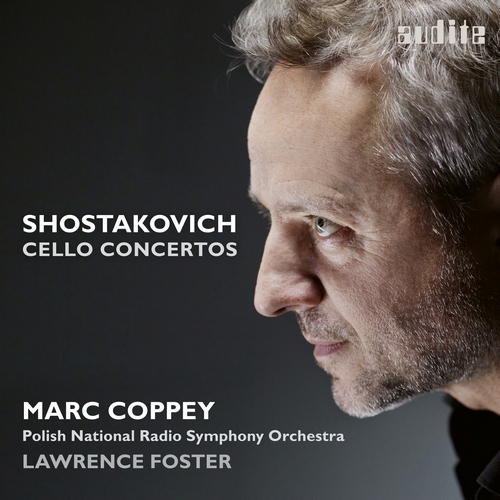 Cello Concerto No. 1 in E-flat major, Op. 107
Cello Concerto No. 2 in G minor, Op. 126
This live recording of the two Shostakovich cello concertos continues audite’s successful cooperation with Marc Coppey, who approaches both works with boundless energy and without any sentimentality.

Dmitri Shostakovich wrote two concertos for the cello, and both are dedicated to the most eminent Soviet cellist of his time: Mstislav Rostropovich. In 1959 he wrote his first cello concerto, whose musical language is almost classical but which also reveals an enormous panorama of moods, gestures and “stories”. Seven years later, Shostakovich composed his second concerto; it builds on the confessional intensity of the first concerto but seems gloomier in character and is infused with threnodic tones.

In this concert recording, Coppey performs alongside the Polish National Radio Symphony Orchestra under the baton of Lawrence Foster in the new Katowice concert hall.

In addition to his existing international activities, Marc Coppey has been appointed Artistic Director of the newly founded Saline Royale Academy, which organizes and produces master classes and concerts with top international artists and puts them online. In 2021, he will be Artist in Residence at the Orquestra Sinfónica do Porto Casa da Música in Portugal, where he will perform the cello concertos by Elgar, Dvořák, Shostakovich, Rhim and Dutilleux, among others.
Recording: December 19, 2019 (live recording), December 18 + 20, 2019 (retakes), NOSPR Concert Hall, Katowice. Marc Coppey performs on a rare cello by Matteo Goffriller (Venice, 1711), the “Van Wilgenburg”.